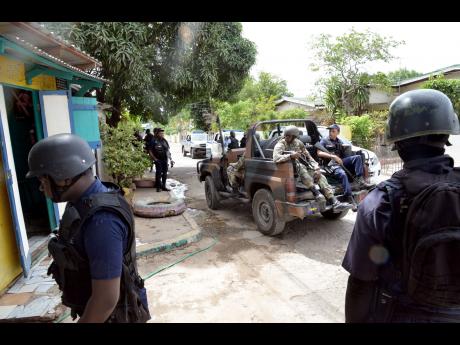 Norman Grindley/Chief Photographer Members of the security forces step up their presence on St Johns Road in Rockfort, east Kingston, yesterday. Three people were shot dead and five injured at a bar in a drive by shooting Wednesday night. 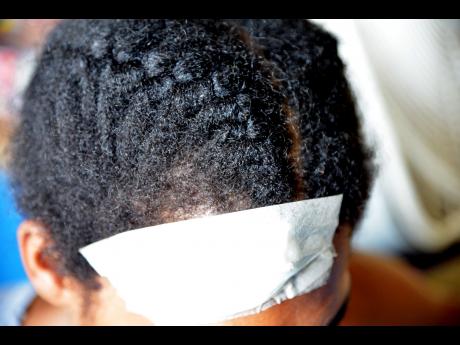 Norman Grindley/Chief Photographer This man was left with a scar from a bullet during a drive by shooting that left three people dead and five injured at a bar on St John's Road in east Kingston Wednesday night.
1
2

Residents of St John's Road in Rockfort, east Kingston, remained shell-shocked yesterday, as dawn broke over the ill-fated bar where three persons were murdered and five others shot and injured during a brazen attack on Wednesday night.

That shooting claimed the

It brings to at least four the number of multiple murders for October, and to at least 12 the number of persons - including a 67-year-old woman - who have been shot dead by marauding gunmen in St James, St Catherine, Kingston, and St Andrew within the month.

At least six persons were shot and injured in the incidents, which threaten a reported downward trend in major crimes since the start of the year.

Up to late this month, police reported that at least 799 murders have been committed since January; a reduction from 966 over the corresponding period last year.

While the Jamaica Constabulary Force (JCF) seeks to assuage public fears regarding the country's out-of-control murder rate, its

"Dem shot up me bar and kill off me fren dem," mourned the owner of the establishment, who identified herself only as 'Afrika'.

Afrika yesterday roamed the establishment, dazed and upset, as her friends washed blood and human tissue from around the bar counter.

"Dem kill dem fi nothing at all. Mi can't believe it," whispered Afrika as she recounted how she clutched Fidel as blood spewed from a gunshot wound he sustained to the head.

The five others shot and injured were regular customers.

Afrika was deeply traumatised by the event, and will need sustained counselling, noted District Constable Patrick Henry, a member of the JCF's Community Safety and Security Branch in east Kingston.

"The grief here is very strong and we can understand that because the incident has just happened," Henry told The Gleaner. "What we are going to have to do now is try to get some counselling for her. But we cannot do that here because she and the the others are still on the scene of the incident. They need to be taken outside of this area."

One youngster, not older than 23, was grazed on the forehead by one of the gunmen's bullets. Yesterday, he sung praises to God that he was still alive.

While the injury to his head has been bandaged, the ordeal from the night before left a woozy feeling inside of him.

"He complained about a feeling in his belly bottom," said Henry, following a lengthy conversation with the youngster inside the bar, still pungent from bleach and other disinfectants.

"We will definitely have to try to counsel him outside this environment. We cannot do it here," Henry said.

Yesterday, a senior officer, who declined to be named because he was not authorised to communicate with the media, told The Gleaner that at least 26 police units with 36 police officers and Jamaica Defence Force personnel had been deployed to maintain a presence in the area. Four persons have been detained and a firearm seized in connection with the incident yesterday, he said.

According to a resident, the gunmen were travelling in a white Nissan Tiida motor car, which they said had been scouting the area all day Wednesday. They said that two men carried out the shooting, scaling two fences before launching their attack. The men then walked back to the waiting vehicle and escaped. The residents rooted the killings in an historical rivalry between men from nearby Wareika Hills and Harbour Road.