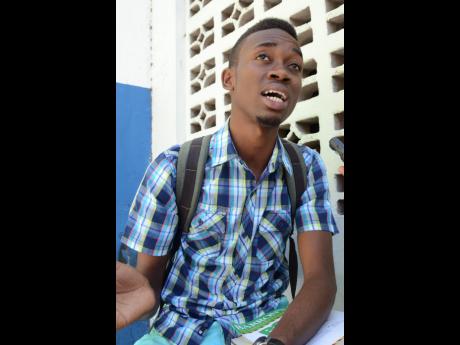 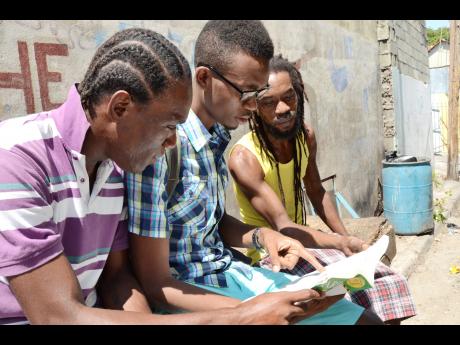 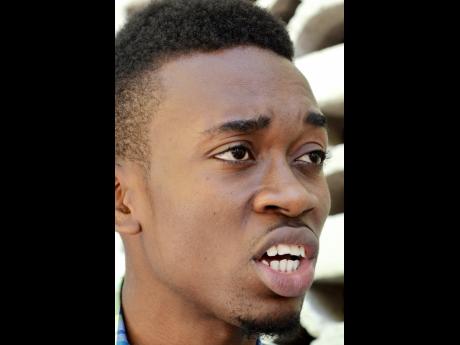 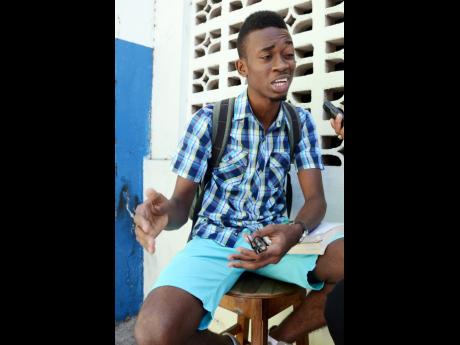 At 19 years old and living in one of the toughest inner-city communities in downtown Kingston, Akeem Laws has emerged as a shining light who enjoys the respect of those around him.

"Even the gunman look up to me," the former head boy of Camperdown High School declared last week as he sat with our news team metres from his house in George's Lane in a depressed section of central Kingston.

A few months ago, Akeem was leading Camperdown to a record semi-final finish in the TVJ's 'Schools' Challenge Quiz'. Despite his roles as quiz team captain, head boy and president of numerous clubs, Akeem still managed to finish high school with passes in eight subjects at the Caribbean Secondary Education Certificate level and and eight units in the Caribbean Advanced Proficiency Examination.

"I wanted to study overseas. Because of my financial constraints, it wouldn't be best for me to study in Jamaica. If overseas, I could have scholarships while working on campus and boarding at the same time," the youngster told The Sunday Gleaner.

But even with a scholarship which covered 70 per cent of his tuition fee at the Illinois Institute of Technology in Chicago, and promised additional funding from the CHASE Fund, Akeem was unable to clear the final hurdle in the way of higher studies.

"I was supposed to do the SATs, but [I wasn't able to] due to the financial burden as my stepdad passed last year. It is just me and my older brother, who is my backbone at the moment, and some of my older relatives, and they don't have the money to finance me through the SAT programme," said Akeem.

The SAT is one of two aptitude tests used by most United States universities to evaluate students' academic level prior to acceptance.

The Camperdown High School Past Students' Association provided significant assistance to Akeem to allow him to complete his high-school studies. The association provided him with a scholarship for his two years of sixth form and also flew him to the United States to speak to some of the persons who had helped him. The past students also gave him grants from grade nine to help with lunch and other auxiliary expenses.

Akeem, who was left solely in the charge of his stepfather at age six, said the acquisition of the US$55-US$85 that he needed to pursue SAT studies had been made harder by the death of his caregiver to lung cancer. However, through the goodwill of his alma mater and the GraceKennedy Foundation, he is now able to attend SAT classes for free on Saturdays and Sundays.

"Fi a poor youth, he has done a lot education-wise. It mek mi feel bad that him can't get fi do him studies, because him have the brains," community member Conrad Gordon told The Sunday Gleaner.

"Even though a garrison, when him deh round we, we nah demotivate him because we know weh him a aim fah. We may not have it, but even one a wi can come out to be a lawyer or something," added fellow George's Lane resident Kevin Allen.

Despite the challenges, Akeem, who spends most of his free time at church and volunteering at the Cross Roads Foundation, is not letting go of his dream of becoming a biomedical or electrical engineer.

help the youth in my community motivational-wise or financially, if I am able to," said Akeem, who is held up as a community role model.

"That is one of the main reasons why I tried out for the quiz team, so they would have the opportunity to see me on TV," declared Akeem. "When I was playing 'Schools' Challenge Quiz', the moment Camperdown High School came on, the lane was empty."

Akeem is no stranger to gun violence and shared stories of having to study lying flat on the ground as gunfire echoed in the community.

He has lost many friends to gang warfare, but a life of criminality has never appealed to him.

"There is really no future in becoming a gunman. The only way out of poverty is to have a solid education, or if you are not one of those persons who are really into academics, do a sport.

"Even recently, two of my close friends died because of some ongoing feud between criminal gangs within the community Ö . I have had a lot of friends who have passed. Some of them have died by my side, so it is very tragic," he said.

Akeem, who was actively involved in football and cricket in high school, says the circumstances under which he was raised helped to make him the determined person he is today.

"Growing up in these circum-stances as a young man, it gives you guts and it lets you come to the realisation that only an education can bring you out of this system and take you to higher places."

According to Akeem, in addition to pushing for further studies, he is working on mending the relationship with his parents. His father migrated to England before he was born and spent 11 years there. His mother moved to St James when he was six and has only returned twice to attend his graduations.

"The greatest challenge growing up was feeling as if my parents had forsaken me," said Akeem, with sadness etched on his face.