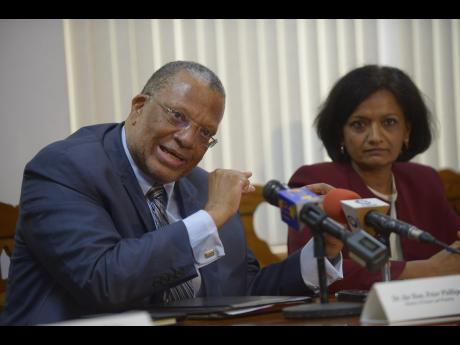 Finance Minister Dr Peter Phillips says the Government will have to cut back on other forms of spending in the economy if public sector workers are to get a higher wage increase than has been proposed by the State.

"We have to be able to ensure that our budgetary resources can be spent to a greater degree on the capital side and on growth-inducing expenditures as we reduce the debt," the finance minister said during a press conference held at the ministry's Heroes Circle offices yesterday.

Public sector workers are currently locked in negotiations with the Government for a new wage contract following five years of wage freeze. The Government has offered five per cent over two years, which has been rejected by the unions.

Noting that the Government must reduce the wage bill as a per cent of GDP to nine per cent by next year, a target that has been deferred by a year, Phillips said meeting the target is critical to the economic reform programme.

"We continue the negotiations in good faith, in that context, recognising, ultimately, that any expenditures above what was targeted will have to be compensated for by reductions elsewhere," Phillips said.

He added: "We have to operate within the available resources. We are halfway through the programme. It is unusual anywhere in the world for a programme to have proceeded without hiccups, but the fact that we have not had any substantial hiccups does not mean that we are not facing a very challenging environment."

The country had agreed with the IMF that the wage bill would be lowered to nine per cent of GDP by March 2016. Laws were also passed by the Parliament, making the target hard-wired. However, the Government set about extending the wage target.