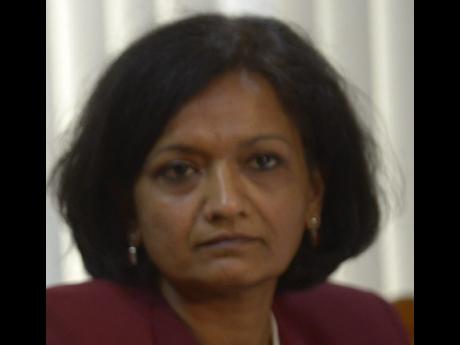 The International Monetary Fund's (IMF) new chief of missions to Jamaica, Uma Ramakrishnan, said yesterday that the missing of the nominal primary surplus target by the country under its Extended Fund Facility is not a big deal.

Jamaica missed the nominal primary surplus target of $121 billion by $4 billion in the eighth review period up to March but achieved the stipulated 7.5 per cent target.

The primary surplus refers to the component of the fiscal surplus that comprises current government spending less current income from taxes and excludes interest paid on government debt.

"I would like to put to rest this issue that is of concern to many of you. I think it has been a bigger concern for people in Jamaica than it is really for us," Ramakrishnan said.

Addressing a press conference held at the Ministry of Finance and Planning at Heroes Circle in Kingston, Ramakrishnan said that the "central focus of the programme was really the 7.5 per cent primary surplus".

"Minor deviations happen, and that is how we see this revenue-performance target. As long as the critical programme remains, which we think is the case for Jamaica, we have in place a procedure, which we follow, to go ahead with the completion of the review without delay, on time, to keep things on schedule and on track," she added.

The Fund's staff team, which reviewed Jamaica's performance, according to Ramakrishnan, will recommend to the executive board that Jamaica's eighth review be approved. If this is done, it will pave the way for the disbursement of US$40 million to the country. The board is expected to consider Jamaica's performance next month.

However, due to the missed nominal target, Jamaica is to request a waiver.