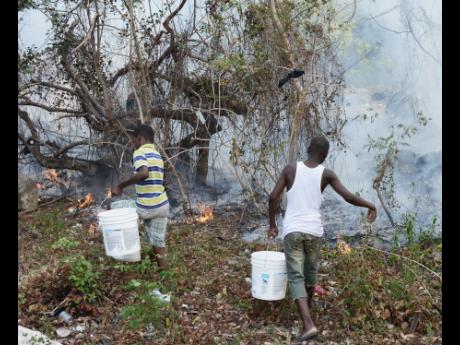 Ian Allen
Residents stand ready with buckets of water to put out a bush fire if it gets too close to their house in Gordon Castle, Llandewey, St Thomas. The fire, which is believed to be caused by the unwise slash and burn practice, has caused massive devastation in the surrounding areas of Richmond Gap, Orange Tree, and Albion Mountain. Thousands of fruit trees such as mangoes and ackees have been destroyed. Several goats have perished in the blaze.

Memry Edie was a nervous wreck Wednesday afternoon as she watched a massive bush fire draw closer and closer to her house which sits along the riverbank in Gordon Castle, Llandewey, St Thomas.

For more than a week, the fire has been raging in the surrounding hills, destroying fruit trees and animals in its path.

"I have never seen anything like this. I can't sleep, I have to be keeping watch because the fire is so close to my house," Edie told The Gleaner.

Her son, James, feverishly catches water from a barrel in the yard which is being fed by a dripping pipe.

Bucket after bucket, he pours it on to the blaze every time it threatens to get closer to the house. He is assisted in the efforts by two of his young nephews, hardly old enough to to carry more than a gallon at a time.

A team of firefighters attempted to bring the blaze under control by trying to cut off any feed the fire could have on its way to the house. They had to do so without water, however, as Gordon Castle, which is across from the barely flowing Yallahs River, is accessible only by a small makeshift footbridge.

Deputy Superintendent Denzil Roper of the St Thomas Fire Brigade, told The Gleaner that his small team of firefighters was having significant challenges accessing the fires that have been plaguing the parish.

"Those areas are very hilly and there are no access roads to some of those areas, so the truck can only go to a certain point and we have to walk and do some chopping to control the blaze in the areas that we can access on foot," he said.

Roper went on to explain that the firefighters have been focusing resources on those areas where there is an immediate threat to life and property.

"The fires have been in the Llandewey area, the Trinityville area, the Richmond Gap area, Albion South Haven in the Yallahs area. These are the main areas that the bush fires have affected, the Cedar Valley area was also affected," he added.

He also disclosed a preliminary assessment of the damage.

"Based on preliminary information that I got, more than 100 hectares was affected by the blaze, some 95 farmers were affected, these were mainly coffee, pine and yam farmers. I spoke to an agent at RADA (Rural Agricultural Development Authority) who gave an initial assessment in dollar terms, we have lost $146 million worth of farm produce," he said.

Roper told The Gleaner that he has had to engage some of the farmers to assist in putting out the blaze as he faces a manpower constraint. He also said the fire units, while efficient, are not as effective as they could be.

Another challenge facing the firefighters in the lack of fire hydrants in the areas in which the bush fires have erupted.

"We have to journey back down to the river areas to get water from open source as there is no hydrant in the area," Roper said.

In addition to her house being in the line of fire, Edie harbours fears that some 150 chickens she rears in a coup in her backyard could be adversely impacted by the smoke.

Meanwhile, Andrea Morgan, principal of the Richmond Gap Primary and Infant School, said the institution could have been razed had it not been for community action.

"The community acted and saved the school. The men mostly rallied around and chopped the bushes that are close to the school and used the water that was in the tank for the bathroom to put out the fire when it came near," said Morgan, while adding that a farmer in the community lost seven goats and a donkey in the bush fire.

The fire is believed to have been started near Llandewey and raced over the hills to Wilson and Richmond Gap, then spreading across the hillsides, sparing little in its path.

Councillor for the Cedar Valley Division, Marsha Francis, told The Gleaner that the fire has devastated the area.

"The fire has devastated the entire Richmond Gap area. It's a total devastation and a big blow to the farmers," she said.

She added that she will be making representation to seek assistance for persons affected.

"We have called on the social security ministry and the ministry of local government to come in to see what they can do to assist us. We can't say at the moment what they are going to do, but they must do something because the people have lost all they had," she said.

Francis told The Gleaner that she is concerned about the hot summer ahead.

"We are hoping that rain will come, because if we don't get any rain, we are going to be in serious problems," she said.

There are fears that with many fruit trees, especially mango and ackee now burnt, and animals killed, the fire will cause increased hardships for the people in the already tough St Thomas area.