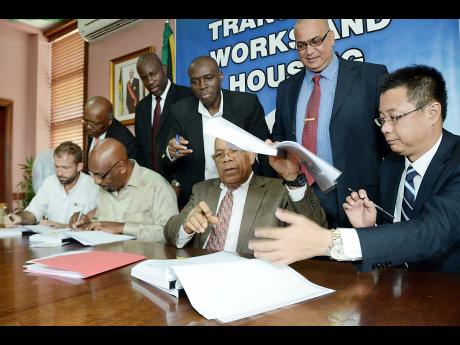 Ian Allen
Transport Minister Dr Omar Davies (second right, seated) hands the contract for the May Pen to Dawkins Pen road to Xutao Chen (right), general manager for the Jamaica North-South Highway Project, China Harbour Engineering Company Limited. The road is to be rehabilitated under the Major Infrastructure Development Programme. Also signing during the ceremony at the ministry’s Maxfield Avenue, St Andrew, offices are James Sampson (left), operations director of S&G Road Surfacing Material Limited; and Rudyard Spencer (second left), member of parliament for South East Clarendon. Assisting in the signing are (from back left) Dr Morais Guy, minister without portfolio in the Ministry of Transport, Works and Housing; Scean Barnswell, mayor of May Pen; and Stephen Shaw, manager of communication and customer services at the National Works Agency.

After years of being in a state of disrepair, the Rio Grande Valley in Portland is to see major repairs to the roadway under the Chinese-funded Major Infrastructure Development Programme (MIDP).

Transport, Works and Housing Minister Dr Omar Davies said yesterday that machinery would start rolling within two weeks, and that just over $1 billion is to be spent on six roads and three bridges this year.

In the case of the Rio Grande Valley road, $144.3 million has been budgeted to rehabilitate 7.8 kilometres of road from Seaman's Valley to Moore Town.

"The state of the roads now is very deplorable. Residents have been protesting about the state of the road for a long time. For the first time, at last, we are going to be getting a decent road from Fellowship to Moore Town, which will open up a vast section of the valley," East Portland Member of Parliament (MP) Dr Lynvale Bloomfield told The Gleaner.

The roadway is the main corridor leading to Moore Town, where a monument paying homage to national hero Nanny of the Maroons as well as the Nanny Falls are located.

"It is an important area for ecotourism, and the rehabilitation will help us, in terms of our bid ... [to get the area declared] a world heritage site," Bloomfield added.

Additionally, Bloomfield said the Rio Grande Valley is a major area for agricultural production and that the repairs will be a boost to both farmers and residents alike.

"Right now, the road is extremely bad. In fact, further up in the valley, asphalt has never been placed on roads there in the history of this country. We are hoping that this will form a basis for further development to take place," the MP said.

The Government is to spend more than US$350 million doing infra-structure works under the MIDP.

In addition to having the roads repaired in Portland, two bridges - Jacob River 1 and 2 - are to be repaired at Lime Bush, also in the Rio Grande Valley, at a cost of $21.2 million.

Another two bridges in Silent Hill in North West Clarendon and Latium in East Central St James are to be repaired under the project this year.

Yesterday, Davies as well as representatives of the main contractor, China Harbour Engineering Company (CHEC), subcontractors and other members of the political directorate signed contracts at the ministry's Maxfield Avenue offices in St Andrew for works in Hanover, Westmoreland, Clarendon, and Portland.

The road from Mineral Heights, through Hayes, to Dawkins Pen in Clarendon is to be done at a cost of $238.4 million.

"There is a need for significant investment in infrastructure, in particular roads and bridges. We all know that we are constrained in terms of the expenditure year, as they call it fiscal space - the amount we can expend within the context of the IMF [International Monetary Fund] agreement. Against this background, we have to be careful in terms of priority," Davies said.

The minister, while telling subcontractors that they are expected to perform under their contracts, warned that he will not allow the MIDP to be hijacked.

"I say to the members of the political directorate. I know there is the demand for work, not that work is not important, [but] this is about getting value for money in terms of every single contract," Davies said.

"I think the society has now passed the stage where anyone feels his power is in terms of allowing road[work] to take place. If that is his power, the easiest thing is not to allow the works to take place and that will solve all of that," he added.