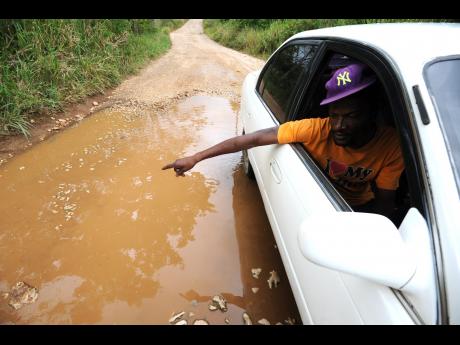 The Capital Development Fund (CDF), which represents the country's earning from bauxite levy, has been depleted to $5.8 million, and many communities that have given up their red gold now feel cheated.

Richard Parchment, member of parliament (MP) for one of the major bauxite-producing constituencies - South East St Elizabeth - laments that areas like his have been cheated because there is hardly anything to show from the levy that should have been used to improve communities.

Information tabled in the House of Representatives last week indicates that $59.8 billion in bauxite levy has flowed into the CDF since 1974 when the first $85 million was collected. The vast amount of those funds, however, have left the CDF and have been placed in the Consolidated Fund to help run the country.

"The vision behind the CDF, when it was being set up by Michael Manley, was to improve communities, but that has not happened. The CDF has been used to assist the Consolidated Fund over time and now we have little to show," Parchment said.

Pearnel Charles, MP for North Central Clarendon, which produced bauxite, said that his constituency has been made worse as a result of bauxite mining.

"Mocho was the Garden of Eden years ago. It used to produce food for Clarendon, Manchester, St Catherine, and Kingston and St Andrew. Since the bauxite companies have been permitted to go into Mocho, they have mined out the agricultural lands; they have pushed down the trees, and Mocho is now a desert," Charles said.

"Mocho has contributed billions of dollars to the Consolidated Fund and we have little to show for it," he added. "I believe that it is a shame that the people should be suffering as they are now."

Residents in the Clarendon hills last week told The Gleaner that there was a dire need for piped water and improved infrastructure such as roads. One taxi operator in Mount Airy said it was a travesty that the roads were in such a condition considering that significant amounts of bauxite had been taken from the community.

He said that there are some communities that have benefited from infrastructure such as community centres and basic schools.

Carl Richards, an elderly resident of Mocho, said Jamalco, which mines in the area, implements projects such as goat-rearing projects and has been involved in the building of schools.

Richards said that the contribution "could be better" even as he said that "not much" had been done by the State to improve bauxite-producing communities.

"In places like Denbigh, Crawle, most of the people have no water to do farming," Richards said.

Irene Williams is of the view that bauxite mining has not been all bad, telling The Gleaner that it is responsible for the positive transformation of the community.