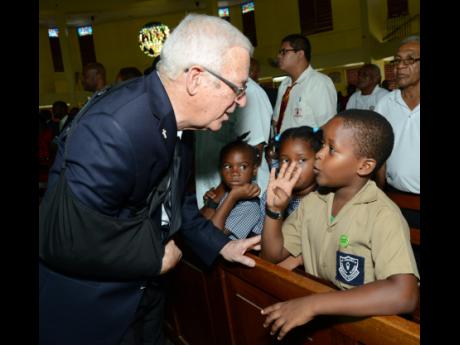 As the new academic year begins today, churches are being urged to play a greater role in schools.

The call has come from Minister of Education Ronald Thwaites, who addressing yesterday's national church service to observe the start of the 2015-2016 school year, underscored the value of the Church to education in Jamaica.

"The Church, along with the school and family, is one of the pillars of socialisation. In this regard, we call for members of the wider church community to establish closer relations with schools on a day-to-day basis," he said.

"You can offer yourself as a mentor. Some persons are already doing this, but the need is great for positive role models for our youth inside and outside of schools," he said. "The ministry is also calling on members of the wider church community to ensure that every child with whom you have some contact attends school."

The education minister also noted the integral role of the Church in operating schools across the island.

The involvement of churches in Jamaica's education system is well chronicled and dates back to the post-slavery era when missionaries came to set up schools in the island.

The Jamaica Baptist Union has boasted on its website that it owns 156 schools. The Anglican, Catholic, Moravian and United Churches also operate what are classified as church-owned government-leased schools.

It has been argued that the top-performing high schools continue to be church-owned and trust-operated institutions.

Thwaites has, however, called on the Church to do more to ensure that all students attend school.

"Around 20 per cent of our students attend school irregularly, some of whom eventually drop out ... . It takes a village to raise a child, so we invite all well-thinking persons in the community, including church members and the police, to ensure that all children are present when school is in session," he said.