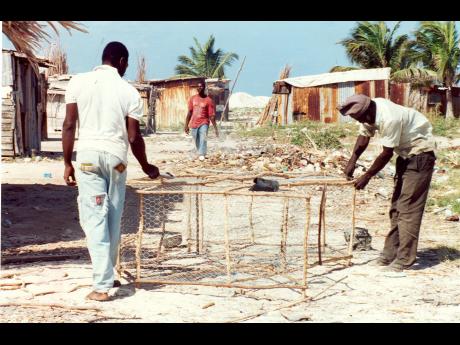 File
These fishermen, two of many who use Pedro Cays as a base, carry out repairs to their fish pots.

In addition to poor public-health conditions on the Pedro Cays, environmentalists are now worried that 15 per cent of land space there could disappear over the next five years due to sea-level rise.

Their fear was sparked by a recent study by Rachel Allen, former senior adviser in the Ministry of Water, Land, Environ-ment and Climate Change, which show that the popular mini-islands were disappearing.

Several other significant issues were raised in the study as well as in a presentation made by coastal ecologist Professor Dale Webber at a climate-change reception hosted by the Jamaica Rural Economy and Ecosystems Adapting to Climate Change.

Webber told The Gleaner that the threat to Pedro Cays, Jamaica's premier offshore fishing ground, is among several cases that highlight how human activities are harming the environment.

"One cay already disappeared some years ago. There are three cays, and the middle one, where people actually live, ... we are seeing that we will begin to lose land rapidly over the next five years and beyond," said Webber, who is pro vice chancellor of graduate studies at the University of the West Indies.

"While climate change is a natural occurrence, human activity rapidly speeds it up, mostly due to the use of fossil fuel, and that has been doing more harm than good. We put out carbon in various ways, and trees absorb carbon because it's a part of their photosynthesis. Part of the problem, however, is that there is a balance in nature that we have somewhat [disturbed] by creating more than the environment can absorb," he lamented.

With these increasing threats to the country, the professor charged that there needs to be a macro-level approach to mitigate against devastating effects of climate change, adding that numerous changes would happen.

"With the changes taking place, ecosystems will experience a significant negative impact. There is no ecosystem that I have encountered in my research that has not demonstrated this, and by this, we mean loss of species, loss of habitat, and sea-level rise. Coral-reef bleaching is now more common than ever before, and low-lying areas are overwhelm-ingly going to have issues based on where they are," he said.

"We need to start thinking of the adaptation measures and other livelihoods. What we also need is a macro effect, and I give credit to our Government for creating a ministry involving climate change because this is a first, certainly in the hemisphere, but it is not enough, and we can't wait [until it is] too late," he warned.

This sentiment was shared by Professor Michael Taylor, head of the Climate Change Studies Group, who noted that a sustainable adaptation strategy is needed.

"At this point, what is needed is a mechanism as to how we adapt to the sea-level rise. Even if the world should come to a sustainable plan, there is nothing much that can be done to arrest the issue," he said.

"With that kind of forecast, if we value the resources at Pedro Cays, we have to begin to think of ways to adapt - whether we might have to relocate the whole village or any other measure. The vulnerability of the people and the assets are increasing with climate change, so it's what do you do in terms of adaptation," he told The Gleaner.