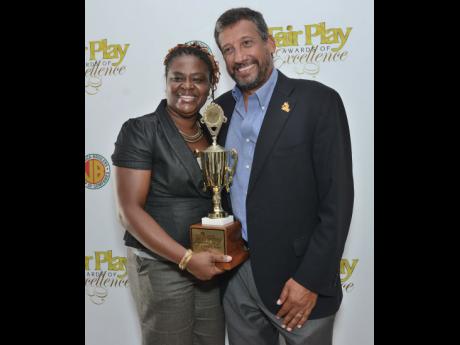 The team of Nadine McLeod, Kirk Wright, Shakir Brown, Talawa Levy, Anthony James, and Carlton McCarthy won $500,000 and the Fair Play Award of Excellence Trophy for an exposÈ entitled Business on Back Road.

The series of broadcasts on TVJ provided insight into the activities of prostitutes who operate along the entertainment strip popularly know as 'Back Road' in Portmore, St Catherine.

Nationwide and 18 degrees North each took home $100,000, as well as trophies with the radio team of Kalilah Enriquez, George Davis, Kara Powell, Abka Fitz-Henley, Orville Burke, Jermaine King, and Andrew Anderson rewarded for its Krauck & Anchor Chronicle. They brought to public attention the division between top-ranking Cabinet members over a proposed US$5-billion investment into a local logistics hub.

The television magazine 18 Degrees North's Ordered to Kill? broadcast on TVJ took viewers into the homes of some of the 76 civilians killed during the 2010 police-military operation in West Kingston, in the process providing a pictorial tribute by way of interviews with relatives and friends.

With 30 entries this year - four from radio, seven from television, and 19 from print - the judges described the entries overall as strong and competitive but pointed to the need for more investigative work and journalistic enterprise.

"Our coverage can and must reach beyond our cities - even our national borders - to tackle matters that affect our diaspora communities, regional interests, and national security," was the charge from chief judge Dr Hopeton Dunn.

Guest speaker Clyde McKenzie challenged media practitioners to be aware, and where necessary, be wary of the potential implications of technology shifts on news content development with regard to fairness, accuracy, and balance.

The media and entertainment consultant noted that while the inexorable march of technology has opened up new avenues of communication for and to more diverse audiences, it also carried the attendant risk of abuse of traditional journalistic standards.

"As a result of the inconspicuous nature of some of the gadgets now available, many of us are often unaware of our being photographed or recorded, a reality that invokes issues of privacy and even fairness," McKenzie noted.

"Those developments have enormous implications for our notions of fair play, because the traditional media houses which acted as gatekeepers to protect the public morals and individual reputations are under threat from the digitally enabled entrants who might not be as zealous about promoting these values. Some will argue that this is the price we pay for the democratisation of the media."