The criminal onslaught which has been plaguing Hanover took a twist on Thursday night when six members of one family were slaughtered gangland-style on Campbellton Road in the Logwood area of Green Island. Their home, a 10-apartment board house, was burnt to the ground.

Four other family members were hospitalised with burns.

The gruesome killings come little more than three weeks after the parish was rocked by a triple murder in St Simon’s district and a double murder in the parish capital, Lucea.

The latest killings have taken the murder tally in Hanover, which was once seen as the nation’s safest parish, to 55 since the start of the year – a 70 per cent increase over last year.

“It is unreal! I know what has happened, but it still feels unreal,” said Kadane Mangaroo, a relative of the victims.

According to reports, some of which were subsequently confirmed by Assistant Commissioner of Police (ACP) Winchroy Budhoo, the family members were at home approximately 11 p.m., when four men, who had arrived in the community in a white Toyota Corolla motor car (Kingfish), kicked down the door to the house and launched an attack. 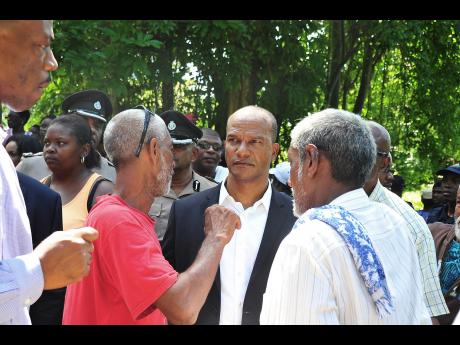 “When the men (the killers) walked into the yard, they called out to the family and said that they should send out [name omitted], who they claimed was inside,” a resident, who was in proximity to where the carnage unfolded, told The Gleaner. The family refused to send out the person and the gunmen began issuing threats.

The resident said shortly after, he heard banging, as if the door was being kicked down. He subsequently heard a barrage of gunfire and screams coming from inside the house.

“It was like a fireworks display and it went on for about half an hour,” the resident said. “When the shooting stopped, I first saw a small fire and then a bigger fire. It was then that I realised the house was set ablaze.”

The resident said that prior to getting back into the car and leaving the area, the men fired another barrage of shots into the air, causing panic among persons living in proximity to the burning house. When the killers drove away, residents rushed to the burning house to see what assistance they could offer. It was then that they discovered that the six had been killed and four other persons had suffered severe burns all over their bodies. Shortly after, police and firefighters arrived on the scene.

“This is a sad day for Hanover,” said ACP Budhoo, who was recently deployed to western Jamaica to tackle the criminal mayhem in the region. “This cannot continue, and I would like to give you, the law-abiding citizens, an assurance that what is happening cannot continue. Those people who are shooting people as if they are killing birds, it is going to stop because we are going to find you.” While residents were generally tightlipped , The Gleaner garnered information which suggested that the area has been experiencing a gang feud, which is being driven by persons wanting to become the ‘don’, which would allow them to dictate the distribution of money generated through the lottery scam.

“We have been hearing that [name omitted] was involved in an incident in which a man was killed a few days ago ... ,” a resident, who asked not to be identified, told The Gleaner. “We were surprised to see him in the area, knowing that his name was being called. I guess he came up here because a family member had just arrived from America.”

Subsequent investigations by The Gleaner revealed that Kerry-Ann Bloomfield, one of those killed, had only arrived in the island, on vacation, just hours earlier from her home in the United States. It is believed that it was her presence which had caused so many family members to be at the house at the time of the incident.

However, in seeking to defend the family’s name, Delores Mangaroo-Hendricks, the younger sister of Lynette Bloomfield, said no member of the family was involved in any criminal activity.

She said the brutal attack was a big surprise to her. “We are a very close family. We are not mixed up. We are a family that believes in working for what you want,” said Mangaroo Hendricks, who, like those killed, is of Indian descent.

“This is a wicked act, and I simply don’t believe we will ever get over it.”