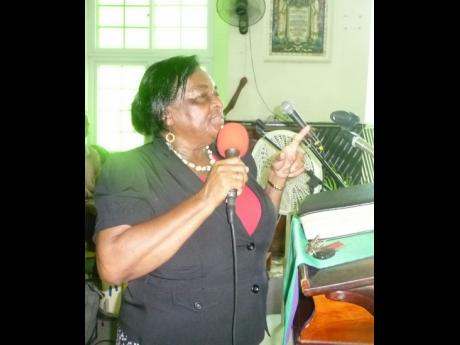 A call for Christians to rally against Hanover's skyrocketing murder rate, and outrage at the slaying of seven people in Logwood on Thursday night commanded a major portion of Pastor Joy Beckford's sermon at the Lucea United Church yesterday.

During her one-hour sermon titled 'Forsaken by God: the Depths of Human Suffering', Beckford said members of the Christian faith in Hanover are being forsaken by God because they have remained far too silent, even as the "forces of evil continue to infiltrate the parish".

"How long are we going to shut our mouths and make all of these things infiltrate our land and our world? Brethren, we have to suffer," Beckford declared.

"As people of God, we have gone astray; we have gone the other way. Our children are in trouble, brethren. Just last week, down in Logwood, look how many persons in one family were shot - six, so far, have died and the rest are in hospital ... . It is here at our very doors. People have to be going into their homes (and) locking up; we turn prisoners and we can't even put out our heads because we are afraid.

"You don't see what is happening, brethren? It started as one getting killed, then two, then four, then five - and it gone, in Hanover now, to seven or eight one time. One family wipe out; more than one generation wipe out. Brethren, we are too quiet. We need to storm the gates of hell; we need to get down on our knees and call on Jesus ... . God is expecting us to do our part. We too silent, we too still, we too lackadaisical ... . We, too, have become self-centred; we, too, have failed.We need to proclaim, we need to praise," she said.

PAWNS OF THE DEVIL

She said, similar to men in biblical days, those who had chosen to reject God and become pawns of the devil, have now been turning on each other.

"You no see what a happen wid di scammers? You notice seh dem turn pon each other? A who cause it? A who allow it? Brethren, if you allow nuh scammers in your house, talk to dem because they will kill off one another. Jesus, have mercy on us because the enemy has set the young boys against each other and ... them own family members," Beckford, also a retired schoolteacher, said.

"The enemy has created war in the camp of the Christians. Dem have di Christians' mouth dem under lock and key, so no longer can the Christians shout hallelujah and amen ... . Too much blood is running in our streets, and all we say is 'bwoy, we sorry fi dem. A wha a happen in Jamaica now'... . Unless the people of God cry out, we shall all likewise perish," she continued.

Beckford said the Church would be marching through the town of Lucea next Sunday to begin the task of reversing the crime situation in the parish through prayer and praise.