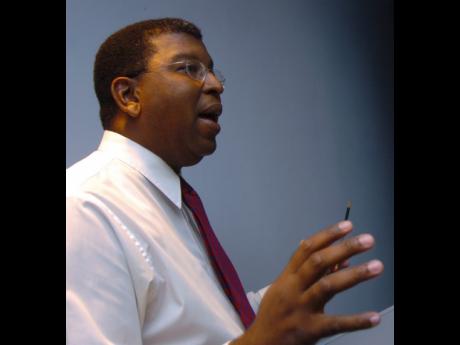 File
Donovan Walker: I want to make it categorically clear that we are not taking any political sides in this issue.

Ahead of a Senate vote on the Caribbean Court of Justice (CCJ) slated for Friday, the Jamaican Bar Association has made it clear that it is in favour of Jamaica adopting the CCJ as its final appellate court.

The association has, however, stressed that this position should not be interpreted as a show of support for either political party.

The association, along with a number of other legal groups and civil-society organisations, issued a statement this week outlining a number of reasons they believed the CCJ should be adopted as Jamaica's final appellate court.

The consortium of legal and civil-society groups said in the release: "We feel it is important at this juncture of our national development to raise our collective influence and voices to support the process by which the CCJ will become Jamaica's final appellate court. Our respective entities have had various consultations either within the respective membership/constituents of each entity, successive Jamaican governments, and other organisations in Jamaica/regionally as regards the CCJ."

Donovan Walker, president of the Bar Association, dispelled concerns that the association, along with the other groups, could be seen as taking political sides.

"I want to make it categorically clear that we are not taking any political sides in this issue," Walker said. "Our comments were based on, in the case of the Bar Association, being intimately involved in this process for decades, and one has to realise that many years ago, the Bar Association did not support the CCJ as the final appellate court ... . So our view has changed over time, and we have seen the court operate for 10 years, so we are comfortable."

Walker said the association "is no one's political mouthpiece, and we are just concerned that the folks are using this for political football".

He added: "Those who might want to take a simple analysis and say because we happen to agree with the Government on this one that we are pro-PNP (People's National Party) must remember that last year, the Jamaican Bar Association ... launched a constitutional challenge against the Government of Jamaica, who wanted to make attorneys-at-law reporting officers under the Proceeds of Crime Act. If we were a PNP mouthpiece, we would have just gone ahead and supported it."

Walker made a call for senators to put aside partisan loyalty when they vote on the CCJ bills on Friday.

"We are encouraging our senators, both from the JLP and PNP, to really act responsibly in the best interest of the Jamaican people in making these decisions. We don't need party whips who take a stand simply on party lines. What they need to do is take a considered, mature approach," he said.