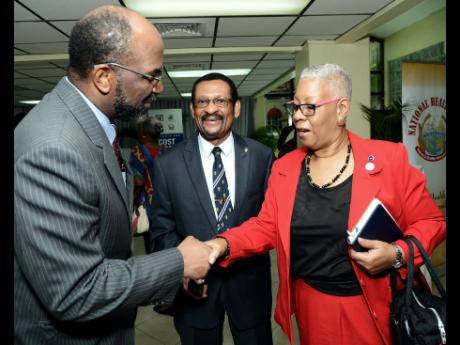 A 24-year-old male, who had no chronic illnesses and was gainfully employed, got involved in a fight and was chopped on the chest and arms then rushed to a hospital in a taxi.

There are many such incidents which occur too often in a Jamaican society stained with blood from more than 1,000 murders per year.

However, in this case, the injured man was fighting with his girlfriend - something he did repeatedly.

During the fracas, according to a case study, a relative of the woman intervened and inflicted the chop wounds.

The case study forms part of the JN Foundation and National Health Fund-sponsored research on the cost of violence-related injuries and road-traffic crashes on the health sector.

Dr Jason Toppin, associate lecturer in anaesthesia and intensive care, who presented the case study, told the story of how the man was rushed to the emergency room bleeding profusely, and how medical personnel immediately carried out blood investigation and administered intravenous fluids. The upper limb of the injured man was subsequently X-rayed.

Speaking yesterday during the Cost of Care and Data Mapping Forum at the Courtleigh Auditorium in New Kingston, Toppin said shortly after he started receiving attention at a hospital, it became obvious that a large artery in his arm was damaged and, in order to save it, he had to be rushed to the operating theatre.

The patient lost three litres of blood and spent a lot of time in the operating room while being transfused with three units of blood and plasma.

Things took a turn for the worse when the man started having difficulty breathing and had to be transferred by an ambulance to another hospital to be treated in the Intensive Care Unit (ICU).

There he had to undergo a plethora of CT scans of the brain, cervical spine, his chest and abdomen, and required mechanical ventilation to breathe.

A day later, the patient's arm became swollen and no pulse was felt. It was believed that his arm was in danger and as such, he was rushed to theatre again for another surgery. However, four days later, it was discovered that his arm was infected and in an attempt to save his life, he was taken back to surgery a third time and his arm amputated.

He spent a total of 34 days in ICU, where he received the highest level of care, including the assignment of a designated nurse, IV fluids administered, a lot of expensive machinery monitoring him and to help him breathe.

While in ICU, the patient developed kidney failure, which was transient and required 12 sessions of dialysis before his kidney functions returned. He also had repeated bouts of serious infections requiring IV antibiotics and many transfusions of red blood cells and plasma.

"We did a number of X-rays, chest studies. Most days, he required physiotherapy - at least one session every day - and there were several days he had physiotherapy twice a day," Toppin explained.

The man was eventually transferred back to the wards.

"Unfortunately, after seven days on the ward, he had a massive bleed from his intestine and died as a result," Toppin said.

"We spent a little less than $6 million on him in hospital and that's the most obvious part of the care - the direct cost."

With the man being 24 years old, the study projected that if he had lived up to 60 years and retired while earning minimum wage - the income lost to his family, that would go to his house, among other things, would be an estimated $10 million.

Toppin argued that the cost of a single injury could result in a potential loss of $16 million.

He reasoned that on the many occasions when the man's girlfriend got injured by him before the fatal altercation, there would have been an opportunity for intervention.

Professor Trevor McCartney, medical chief of staff at the University Hospital of the West Indies, who was one of the lead investigators in the project, said the findings of the study would be a point of reference for stakeholders to establish preventive programmes geared to reducing violence- and motor vehicle-related injuries, as well as to eliminate the constraints faced by hospital services as a result of these incidents.