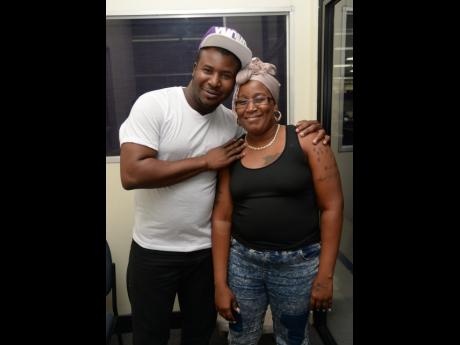 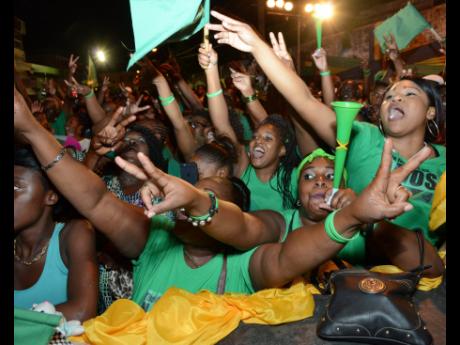 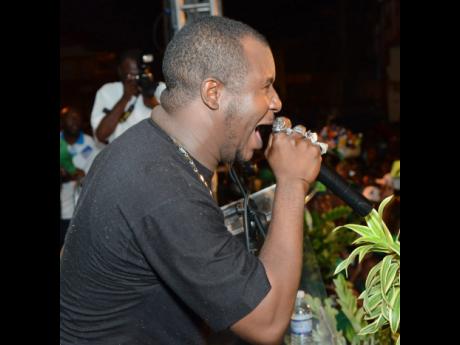 As the political beat gets louder, gospel artiste Ninja Diamond has succeeded in captivating the attention of music lovers on the campaign trail over the past few days.

Roll Call has had at least one part of the society rocking to the lyrics:

"Is your name written there?

In Prosperity Book of Life

The catchy ditty has set the stage for political repartees from the platforms of both parties.

After the release of the campaign song, People's National Party (PNP) President Portia Simpson Miller quipped that she was the teacher who had "marked the JLP absent".

It's now the JLP's turn to counter in the platform clash.

Ninja Diamond is no stranger to the political platform or the church podium.

For just as he dances to the beat of the JLP in front of diehard supporters, Ninja Diamond has been prancing in the name of the Lord for a number of years.

A bishop at the Effectual House of Praise in St Thomas, Ninja Diamond told The Gleaner that he has taken time off to travel with the JLP around the island in search of an election victory.

Ninja Diamond said he is an offshoot of his "adopted father", Desmond Ballentine, aka Ninja Man, with whom he worked from 1993 to 1999 when he committed his life to the Lord.

"I am an elected bishop," declared Ninja Diamond.

Asked what he, a born-again Christian, was doing on a political platform, Ninja Diamond responded: "I am a man of God and mi want the change. Mi waan run from poverty to prosperity."

Ninja Diamond disclosed that as an artiste, veteran JLP stalwart Olivia 'Babsy' Grange is his manager, having met her through another JLP stalwart from west Kingston.

"I was introduced to her by Bishop Dennis Messias," the singer told The Gleaner, adding that he would be travelling the island with the JLP.

"As mi say to you, I want to run from poverty to prosperity, so I will be going with the JLP."

But there is a little more to Ninja Diamond's story. He said he has been a longtime diehard Labourite - "from me born".

It was revealed that Roll Call was penned jointly by Grange and JLP leader Andrew Holness.

Ninja Diamond's wife, Sukisha, who is one of three backup singers for the artiste, was with him when he visited The Gleaner.

She, too, claims to be a born Labourite.

The other two members of the Empower Praise Singers who do backup for Ninja Diamond are Zeneca Morrison and Pastor Donovan Gray.

Ninja Diamond said he has one gospel album and two singles out.

The album is titled Hello Man, Know God for Yourself and the singles are Alleluia, Lord You are Worthy to be Praised, and God Alone Will See You Through.