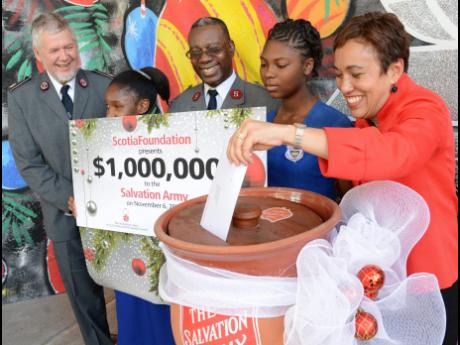 Commuters rushed to get to the next bus stops and peddlers shouted the prices of their wares as they manoeuvred through the crowd.

Businesses waited for customers, and honks and beeps could be heard as the busy commercial centre of downtown Kingston came alive last Friday.

Seemingly, everything was normal.

But this busy scene was juxtaposed with the lively chatter, laughter, decorations, and music that filled the air at the Scotiabank Centre at the corner of Duke and Port Royal streets.

The event, the launch of the Salvation Army's annual Christmas Kettle Appeal, was just what was needed to remind passers-by and all those present that Christmas Day is only seven Fridays away.

This year's drive was launched under the theme 'Inspiring Hope' and was done in collaboration with Scotiabank, which has been a Salvation Army Christmas Kettle Appeal partner for 14 years.

For more than 20 years, the Christmas Kettle Appeal has been raising funds to assist Jamaica's poor, elderly, and homeless at Christmas time.

This Christmas, the Salvation Army is hoping to raise $16 million to help nearly 8,000 less fortunate Jamaicans.

It may seem like a lot, but many would be surprised to know that the Salvation Army has surpassed its target in previous years.

Though it didn't meet the $15-million 2014 target, the Salvation Army has increased the amount this year and is hoping to surpass it.

Scotiabank has already contributed $1 million - a big boost for this year's drive.

Jacqueline Sharpe, president and chief executive officer at Scotiabank, said the bank is encouraging corporate entities to contribute to the Christmas Kettle Appeal, noting that food items are also accepted along with cash donations.

"People have less spending power and less ability to give cash, but they can give of their time and their effort. It's about taking the time to give back even if you can't do it in the form of cash," said Sharpe, who noted that last year, Scotiabank branches across the island participated in the Give Good Drive, which collected grocery items from staff and customers on behalf of the Salvation Army.

Other corporate entities and members of the public presented cash donations at last Friday's launch, but the charity has a far way to go and is also counting on the public to raise the funds.

Major Darrell Wilkinson, divisional commander for the Salvation Army's eastern division, told The Gleaner that members of the public are the biggest donors to the Christmas Kettle Appeal.

"We realise that the Jamaican people give more and more each year, and we are counting on that to raise the $16 million this year," said Wilkinson, who stated that as of Friday, the Salvation Army's eastern division would have nearly 40 volunteers collecting funds in Clarendon, Manchester, St Mary, St Thomas, Portland, as well as Kingston and St Andrew.

Wilkinson is appealing to members of the public to support the volunteers, who will be positioned with kettles outside the doors of banks, supermarkets, clothing stores, and many other business entities until Christmas Eve.

"We are at different stages in life, and those in better positions must look out for each other. We must be our brother's keeper," Wilkinson stressed.