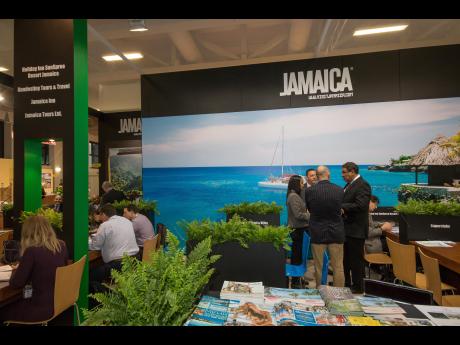 The Jamaica Tourist Board’s booth showcased the destination’s resorts and attractions. The booth served as a meeting place for the island’s tourism partners to network and engage in business consultations with members of the international travel trade during ITB Berlin 2015 in Germany.

THE JAMAICA Tourist Board (JTB) shelled out more than $4 billion over the three-year period 2012-2015 to marketing and public-relations service providers to promote Jamaica as a tourist destination, but Auditor General Pamela Monroe Ellis said the agency did not have proper systems in place to assess the economy and efficiency of its marketing activities.

"Consequently, we were not satisfied that the JTB had assured itself that value was obtained for the $4.07 billion paid to marketing and public relations service providers to promote the country as a tourist destination ...," the auditor general said in an activity-based audit report tabled in Parliament earlier this week.

The audit focused on the management of overseas marketing funds and whether appropriate levels of accountability were in place to ensure that value for money was achieved.

One agency was engaged by the JTB to provide global advertising services and two others to provide public relations and marketing services for the Americas, Europe, and the United Kingdom.

"Although the agencies submitted annual plans and reports on the JTB's request, we found that the JTB did not implement a structured monitoring arrangement to ensure robust review of these reports in order to assess the agencies' performance relative to the agreed-upon deliverables," the audit stated.

Inconsistencies were detected with the contractual obligations of the agencies as the JTB did not require all agencies to submit annual plans. The auditor general said this lack of standardisation compromised the JTB's ability to examine and influence the marketing strategy of these agencies.

It was also highlighted that the JTB did not seize the opportunity to negotiate better terms or capitalise on competitive market rates when some service providers' contracts expired.

Another glaring finding of the audit was that the JTB did not ensure that the interest of the Government was legally protected, but rather "appeared to have relied on the goodwill relationship established with the marketing representatives".

Monroe Ellis found that contracts for three marketing representatives included a rollover clause that enabled automatic renewal for a maximum of one year if the JTB did not issue a notice of termination. Two of the three contracts expired in July and December 2006, while the third expired in June 2009.

Monroe Ellis pointed out that evidence of the authority for continued payments on the expired contracts was not presented. A senior officer at the JTB advised the auditor general verbally that the rollover clause was applied to all the marketing contracts, hence the payments outside of the contract period. "The situation outlined is an indication that the JTB was not adequately monitoring these contracts."

It has been reported that subsequent to the audit, the JTB took steps to regularise four of the expired contracts; however, Monroe Ellis said that at the date of the report (October 2015), the procurement process was incomplete.