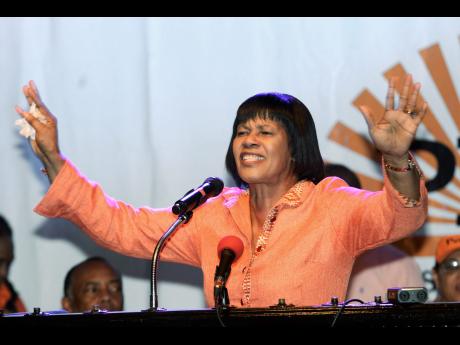 Prime Minister Portia Simpson Miller is the most watched person in Jamaica at this time, and for good reasons.

With the country in election mode, the telescopic focus is zooming in on Simpson Miller, the only person empowered to call the much-anticipated general election.

For most of last week, there was speculation that Simpson Miller would call her Comrades to a mass meeting in the Corporate Area this evening and announce the election date.

But Paul Burke, general secretary of the People's National Party (PNP) and a key Simpson Miller confidant, put those speculations to rest last Thursday when he announced that though the party would meet in Portmore, St Catherine, the election date won't be named.

The reaction from Comrades and Labourites was mixed, and the waiting game seems set to continue for at least one more week.

For PNP supporters, whenever Simpson Miller names that date will be the right time for the party to be returned to power, while supporters of Jamaica Labour Party (JLP) charged that the prime minister "ketch her fraid" because internal polls show that the Government is set to be voted out.

It was Simpson Miller who had set her party election machinery in motion before her premier political rival, Opposition Leader Andrew Holness, announced an election "roll call".

Now the nation is in wait-and-see mode, with Simpson Miller's every appearance on a political stage being watched with anticipation.

For Dianne Fagan-Morrison, the many feel-good announcements coming from the Government in recent days are confirmation of an impending election.

"Loads of projects being unveiled, all previously comatose members of parliament have come alive and, suddenly, either have a solution/opinion or an objection to all issues around," said Fagan-Morrison.

She pointed to what she described as a common feature - the suddenly acquired overly caring approach of politicians who are popping up frequently in the once-neglected constituency - as a sign of a nearing election.

The obvious question then is, will Simpson Miller call the election soon?

JLP stalwart Mike Henry 'announced' from his party's platform, a week ago, that the date for the general election is December 10.

It is the birthday for former Prime Minister Michael Manley, two days before that of Simpson Miller's.

But Henry is not the prime minister, the only person empowered to fly the gate. And so the country continues its wait, its attention glued on Simpson Miller.

The curious "crowd count" of Manley - Simpson Miller's political mentor - in 1980 that gave him "150,000 strong can't be wrong" before calling an election he lost by a staggering 52-8 margin is memorable.

So was Edward Seaga's blistering bashing of PNP rising star Dr Paul Robertson that heralded the 1983 polls, which Manley and the PNP boycotted, and handed the JLP 60 seats in Parliament.

Another standout in the annals of election announcements came in 1993, when P.J. Patterson flavoured his campaign with the catchy "Fly the gate and let in the pirate" lyrics from a popular hit of the day.

When the gate was flown, the Patterson-led PNP swept the election in historic fashion, bagging 52 of the 60 seats.

"The response of the crowd is always the high point when an election is called, and the energy is so high that not many people hear the date when it is finally announced," said former politician Heather Robinson.

Seaga's biting "political midget" characterisation of Robertson, who had demanded his resignation in 1983, is part of the political folklore which will live forever, even as political watchers remember the PNP's boycott of that election.

Those are a far cry from these days, but the thrills and spills remain, fuelled by speculations and so-called educated guesses.

There was the "Call it, Andrew, call it" chant by confident Labourites in 2011, spurred by the seeming hesitance of the spanking-new JLP leader an electoral season ago.

Uncertainty is reported to be hovering in the halls of the governing party as senior members languish in a quandary as to whether the election must be called immediately.

Then there is the debate on which party is leading in the polls at this time and whether it is wise for the governing party to gamble when, constitutionally, it has until December 2016 - more than a year to go to the polls.

Brash claims by JLP's Daryl Vaz, the member of parliament for Western Portland, has reportedly triggered some anxious moments in the ranks of the PNP.

Vaz declared that the JLP is ahead in at least 33 of the 63 seats, although this claim has been dispatched by Burke.

And so, as it was eight years ago, Simpson Miller is, once again, the principal focus of Jamaicans.