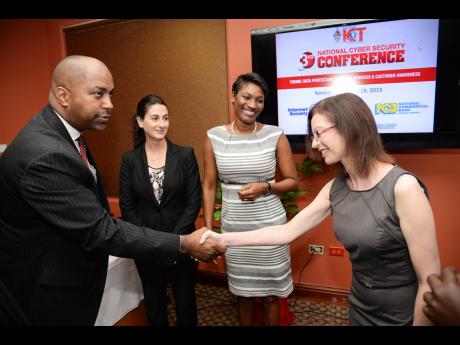 Since taking up his post earlier this year, the Government's Chief Information Officer (CIO) Dr Louis Shallal says he has experienced a baptism of fire in regards to the cybersecurity threats that state agencies face.

It is for this reason that Shallal is introducing several measures to address the cybersecurity needs of the Government.

Shallal, who was a lead presenter at the third National Cyber Security Conference, spoke to the need for an enterprise information security architecture (EISA) system that would cater to the cybersecurity needs of all government agencies.

He indicated that he was currently preparing requests for proposals and seeking funding for the implementation of such a system.

Shallal also said there are plans to engage a chief security officer, who will deal with cybersecurity issues for the entire government service.

"We are seeking funding from the Inter-American Development Bank to get the system and, based on how things go, we will be putting out a request for proposals for consultants to offer their services to procure and implement the system," he said.

measures to be implemented

Julian Robinson, state minister in the Ministry of Science, Technology, Energy and Mining, who also addressed the conference, said a number of measures are being put in place to deal with the increasing number of cyber attacks and computer security incidents within government agencies.

According to Robinson, Shallal has been charged with developing minimum security standards for the use of IT systems and personnel within the public service which all ministries, agencies and departments will have to abide by.

Although there has not been a major attack, several government agencies have in recent times been the victims of cyber attacks.

Robinson pointed out that the Government will be increasing its efforts to deal with cybersecurity threats.

"We have implemented a cyber response team which should be fully on board by the end of this financial year. We have secured the space, we have the technology, we have the people. We are creating and implementing a strong policy framework, strengthening legislation, equipping our security forces, ensuring we have robust systems in place, developing a cadre of local experts that have First-World training, having access to the best and most modern technology," he said.