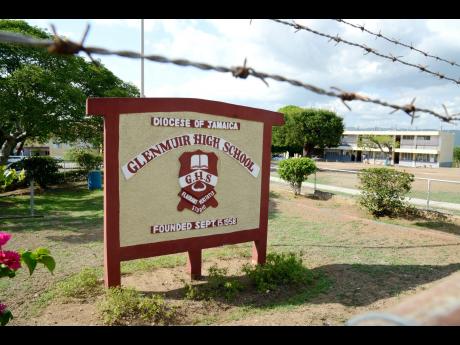 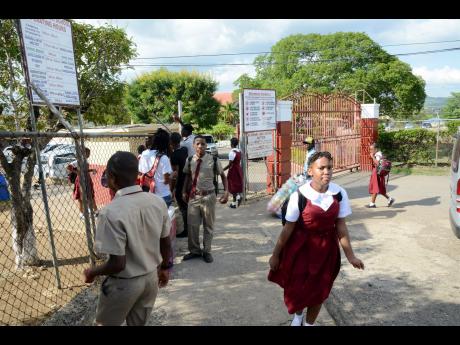 Rudolph Brown
Students of Glenmuir High, the most in-demand secondary school in Clarendon, outside the institution last Thursday.
1
2

More than 34 per cent of the 4,200 students who sat the 2014 Grade Six Achievement Test (GSAT) in Clarendon selected Glenmuir High School as their first choice.

This made Glenmuir the top choice for primary-school students in the parish and saw it outpacing other prominent schools across the entire island as the first-choice secondary school for GSAT students.

But the push to get into Glenmuir has created a new problem for the administrators, with principal of the church-owned institution Dr Marsha Smalling reporting that the facility is in desperate need of expansion.

Over the last four years, Glenmuir High, Denbigh High and Clarendon College have consistently been ranked the top choice for more than 50 per cent of the students sitting GSAT in Clarendon.

While Glenmuir had emerged as the top choice for more than 32 per cent of GSAT students in Clarendon each year, Smalling said the overwhelming popularity of the institution has resulted in overcrowding.

At present, Glenmuir's six grade-seven classes can accommodate a total of 240 students, but more than 1,400 selected the school as first choice in 2014.

"Currently, my brain is just working overtime because we need to build more classroom spaces for sure," Smalling told The Sunday Gleaner.

"It's putting pressure on me as a principal, for example, when you have so many students who have the grades to come into first form, but because we do not have the space, we can't facilitate them, and so we are considering probably building more classroom spaces to give more students the opportunity of an excellent education," said the principal, who is also a past student of the institution.

Of those Clarendon-based students who sat GSAT in 2014, a total of 1,420 students selected Glenmuir as their first preference, while Denbigh High School was selected as the school of choice for 567 students. Meanwhile, 453 students had Clarendon College as the school they most wanted to attend.

Although the Ministry of Education is tasked with the job of placing GSAT students, Smalling said she had more than 200 parents showing up at the school this past summer to seek transfers for their children who had been placed at other secondary schools.

"As I speak, our classes are really overcrowded because we have an average of 45 students per class," said the principal, who wants at least two more classrooms to be added to each grade.

Although the school was built to accommodate 1,200 students, there are more than 1,600 students enrolled at the institution.

In 2012, the National Inspectorate Report for the school found that although its capacity was 1,000 at the time, the co-educational institution had more than 1,750 students enrolled.

The report noted that the Anglican-operated school performed well above the national average in English and mathematics at the Caribbean Secondary Education Certificate level; had good management and leadership; teachers were knowledgeable about their subject areas; and students' personal and social development was good.

Although a few infra-structural deficiencies were identified, the team from the Ministry of Education found that the school made good provisions for safety, security and the health of its students.

Smalling said her vision is for the school to become the top-performing one in Jamaica. The school is generally ranked among the top 10 schools in the island, but Smalling, who received the Governor General Youth Award for Excellence for the parish of St Elizabeth in 2009, said this is not enough.

"Our target is that we want to be ranked first because we have the students with the potential and we have the teachers who go beyond the call of duty," she said.

Education Minister Ronald Thwaites said his ministry stands ready to assist the school in building additional classrooms to better accommodate students, once a proposal is submitted by the school's board and the Anglican Church.

"Glenmuir is so good that if they can accommodate additional classes, we would want to assist with that," Thwaites told The Sunday Gleaner.