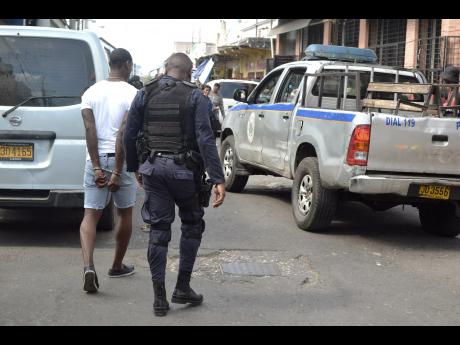 This police officer takes a man into custody during the operation in downtown, Kingston on Thursday.

MORE THAN 20 persons were on Thursday detained as cops from various police divisions swarmed downtown Kingston in an operation called 'Clean Sweep', the first of several aimed at bringing order to the shopping hub in time for the Christmas season.

"We promised the public safety and security, and we are putting the things in place now to guarantee their safety," said Superintendent Michael Scott, head of the Kingston Central Police Division.

"If you look around, you can see that people are moving around freely. This is the beginning of it. This is what we are using now to give us the space for deployment," Scott continued. "We will be having similar operations in the coming weeks to ensure that we fulfil our promise."

According to Scott, the operation was aimed at removing illegal vendors and stalls, clamping down on unruly transport operators, and at identifying and arresting wanted men. These were necessary for the security force's Christmas safety strategies to be effective, he said.

Among those strategies was an increase in the number of uniformed and undercover officers patrolling downtown, Scott revealed.

Thursday's operation involved representatives from the Traffic Division, the Mobile Reserve, the Kingston and St Andrew Corporation, the Island Traffic Authority, among others. It went from 9:30 a.m. until about midday, Scott said.

It was not clear up to late yesterday afternoon if any of the men detained were wanted for any crimes.

During the operation, at least six men were seen being interrogated or detained by the police, who took up positions at almost all major intersections in West Parade, including the problematic Beckford Street, which is usually impassable by vehicles and pedestrians because of vendors who openly display their goods on the ground.

On Thursday, that stretch was clear of debris as policemen ordered vendors to remove robes and cardboard used to hang goods for display. Some vendors grumbled as the operation unfolded.