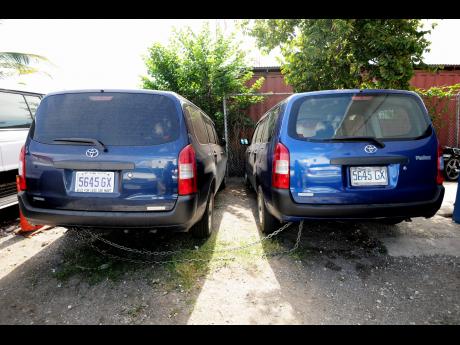 Ricardo Makyn
Two Toyota Probox cars seized by the police parked at the Elletson Road Police Station in Kingston. One of the vehicles was cloned.

A LOVE AFFAIR that reportedly started behind prison bars has ended with a woman and her lover in police custody, both facing charges for abduction and what investigators believe may be an orchestrated motor-vehicle, cloning racket.

Head of the Police Traffic Division Senior Superintendent Calvin Allen said the two were arrested as part of a probe into the theft and cloning of a Toyota Probox, which was ditched after its operator, who turned out to be a recently released ex-con, abandoned the vehicle and ran from the police during an operation in Half-Way Tree, St Andrew, last Sunday.

The driver was quickly collared, said Allen, adding that it was later revealed that the man had been released from prison on November 6 after serving time for illegal possession of a firearm and robbery with aggravation.

Investigators also uncovered that the vehicle was stolen in Manchester weeks earlier and that it was made to resemble one owned by the woman whose name was on the registration papers of both motor cars.

"What we are picking up is a carefully orchestrated plot and criminal intent on the part of the owner of the original vehicle and the person who fled the stolen vehicle," said Allen.

"The vehicle, when it was robbed, was gray. Thirteen days later, it was painted blue and its licence plate number changed, chassis number tampered with, and (registration sticker) on the windscreen (also) tampered with."

"Based on what we are unearthing, they were not looking to steal any other vehicle. They were looking for a specific vehicle based on the original one that they had," said Allen, adding that the vehicle was stolen by four men posing as police officers.

According to Allen, the men accosted a family near their home in Manchester and told them that their vehicle had been earlier involved in an accident at a nearby restaurant and that they were needed back at the accident scene.

During the trip, he said, the occupants of the motor car were ambushed, ordered out of the vehicle, and left stranded on the side of a roadway by the men.

Allen declined to comment on the romantic relationship between the woman and the ex-con, but sources told The Gleaner that the two had been intimate prior to the man's release from prison.

Upon the man's release, the source added that he was staying at the woman's house.

"While our investigation continues, we are seeing where there is a connection between the original owner of the legitimate vehicle and the ex-convict who has been arrested," offered Allen instead.

"This individual was released on November 6 and involved in this robbery on the 16th," said Allen. "The stolen Probox was not in the colour they wanted, so within 13 days, they went and sprayed it in the same blue, like the other one, and got a licence plate with the same numbers and lettering of that vehicle. This ex-con even acquired a general driver's licence on November 26."

"This sort of situation goes to show the public the enormity of the situation that the traffic police have to deal with," said Allen, commending the policemen who made the initial arrest in Half-Way Tree and also the sleuths who had been probing the case.

Allen said that his team was probing several leads in search of at least three other persons who are said to have taken part in the police impersonation and theft of the motor vehicle in Manchester.

He noted that while motor-vehicle cloning is not new, it is unusual that owners of the legitimate vehicles directly participate in the process.