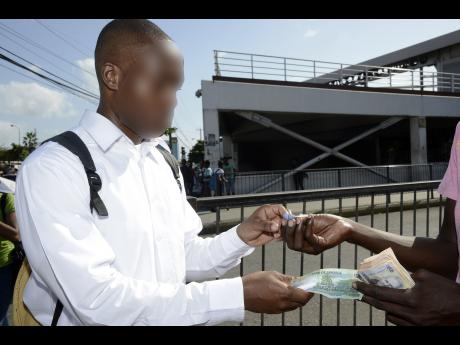 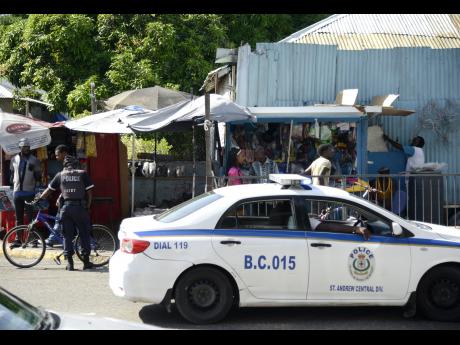 Police carrying out an operation in Half-Way Tree last week, meters from where schoolboys were buying Viagra. 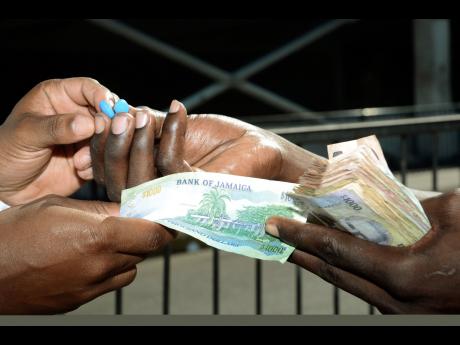 Paying cash is an undercover reporter as he bought Viagra pills in Half-Way Tree last week.
1
2
3

The wonder drug developed to treat erectile dysfunction in men, Viagra, is currently being sold on the streets of Kingston, with schoolboys being among the primary customers, prompting one medical doctor to call for urgent action by the police and the Ministry of Health to tackle the issue.

"It is illegal to distribute a prescription drug without the requisite licence. It is not only an issue of public safety on the part of persons who may engage in purchasing and supporting that black market, but also from the standpoint that it is a criminal act to be distributing that," Dr Shane Alexis told The Sunday Gleaner after our probe found that two varieties of the pills are being peddled in the vicinity of the Half-Way Tree Transport Centre and in several areas in downtown Kingston.

The diamond-shaped blue pills, one bearing the letters 'DL' on both sides and the other '100', attract a price of $800 and $600, respectively, with the first said to be the more potent.

The pills with DL on both sides are alleged to be a fake version of Viagra out of China, which have the same effect as the original prescription tablets.

Research also revealed that the '100' pill is a generic form of Viagra, which is believed to be manufactured in India.

"It's being sold like a phonecard in downtown Kingston, with persons just approaching men on the road offering to sell them," said a source in the medical sector.

"I have also heard that some pharmacies are selling it without a prescription from under the counter. It is a medical concern because people don't understand the danger," added the source.

Last week, when a young member of our news team donned his former school uniform and visited Half-Way Tree in search of the pills, they proved very easy to find, as every vendor was aware of where they were being sold and who to get them from.

It was at a stall where clothes and shoes were being sold, metres from the busy transport centre teeming with schoolboys and with police on foot patrol in the vicinity that the Viagra was bought.

The vendor responded in the positive when he was asked if he was the one selling Viagra, and despite the school uniform, the youngster was offered the pill with the only proviso being that one version cost $600 and a more potent version was available for $800.

When one of each was requested, he reached for a second bag that appeared to contain only a pair of shorts, which when unravelled revealed more pills.

When asked if there would be any side effects for someone so young, the vendor said, "No, man. Just take it half an hour before you a go mash a work (have sex) and you good."

But contrary to the vendor's pronoun-cement, erectile dysfunction medication can have a number of adverse effects such as upset stomach, abnormal vision, nausea, dizziness, rashes, indigestion, and back and muscle pain.

Viagra and similar drugs work by increasing the blood flow to the penis, making it easier for a man to achieve and sustain an erection on stimulation.

Alexis believes most of the teenage boys who use the drug are not really aware of what it is about.

"You and I know that these guys are not doing it because they genuinely have a problem; it is really more a hype thing," said Alexis.

He prescribed a multi-agency approach to the issue of adolescent males accessing and taking erectile dysfunction medication.

"An inter-agency approach is needed because the solution has to come from collaboration. The various state agencies need to attend to it in an urgent manner because this has implications for our health," said Alexis, the immediate past president of the Medical Association of Jamaica.

He reiterated that the sale of prescription drugs on the streets is an illegal and dangerous practice.

"It is something that needs to be investigated very quickly, through the relevant department in the Ministry of Health and any other ministry, such as, perhaps, youth, etc," said Alexis as he emphasised that there are serious health risks to taking any medication without having it properly indicated, and understanding not just the benefits, but what are the effects and side effects.

"In the case of very young people, it may be that there is so much interest in having a good time that they have not stopped to think, or have been made aware, of what are the downsides," said Alexis.

"It is something that needs to be looked at immediately because with sexual activity, there are a number of other issues that could arise, especially if you are irresponsible - such as pregnancies and sexually transmitted infections. That is something that our young people need to understand so that they can make responsible and informed decisions."

Researchers have warned that what these youngsters use to boost pride and ego could develop into an addiction.

"Though erectile dysfunction drugs are not physically addictive, there is psychological addiction, as persons can develop a sense of dependency," the researchers have warned.