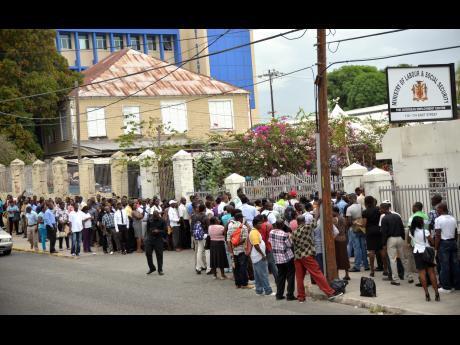 File
Job seekers lined up at the Ministry of Labour and Social Security on East Street in Kingston.

South West St Catherine Member of Parliament (MP) Everald Warmington is urging the Government to immediately establish a special programme geared specifically at providing employment and support for the thousands of students leaving educational institutions annually, many of whom he said have become beggars.

"You find that many of these young persons on the street corners are educated young people. They are begging, asking for assistance here and there, cannot find not even food," Warmington said as he opened debate on a private member's motion he brought to the House of Representatives.

Warmington said there are thousands of young persons graduating annually from educational institutions, many of whom are leaving tertiary institutions owing large sums of money to the Students' Loan Bureau.

"We can't afford to be educating these young persons constantly without any provisions made for them," the opposition MP said.

He said many of the victims of unemployment were persons trained as teachers.

"I am sure that all of us are exposed to these kinds of situations in our constituencies," Warmington said as he made the case for state intervention.

"Daily, I have young people coming to me asking for jobs, asking for handouts."

He said Jamaicans are proud people who want their chance to shine.

"All they want, after going through education, is a decent job after they have achieved such level of education."

Warmington said that, having spent huge sums educating their children, many parents are forced to care for them because they are unemployed.

"There are many cases where the parents are getting old and shaky and are looking forward to these young persons who are now educated to assist them, [but] the children are not able to assist the parents in any way at all," he added.

Prime Minister Portia Simpson Miller had pitched the Jamaica Employ and the Jamaica Emergency Employment Programme (JEEP) as initiatives that would help reduce the levels of unemployment in the country.

JEEP, which is geared at providing short-term employment to low-skilled Jamaicans, has so far delivered more than 57,000 jobs, the Government has said.

However, the Jamaica Employ programme has virtually been scrapped.

In 2013, Derrick Kellier, then labour minister, said 4,559 persons had registered with the Ministry of Labour under the Jamaica Employ programme.

Kellier said 400 persons had been referred to various companies within the private sector for consideration for employment and approximately 100 had landed interviews.

"We could immediately reduce unemployment by 40,000 over the short term, and I am sure, as Jamaicans, we can," she said.

Under the programme, which is underpinned by a memorandum of understanding between the Government and the Jamaica Chamber of Commerce (JCC), businesses would seek to employ at least one additional qualified Jamaican within their organisation. Under the agreement, the labour ministry receives rÈsumÈs from Jamaicans and places them in a database. This is then accessed by the private sector, which matches skill sets with job openings.