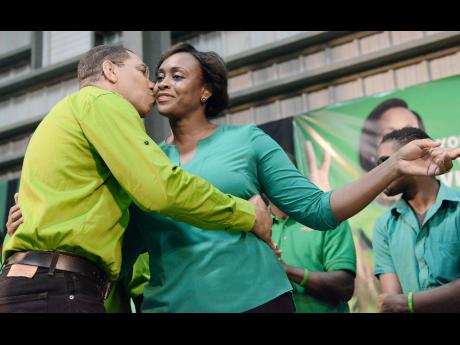 Rudolph Brown
Andrew Holness, leader of the Jamaica Labour Party, greets his wife Juliet Holness before presenting her as the candidate for St Andrew East Rural during a constituency conference held last night at Jamaica College.

Declaring that the "I tricked you" era is a thing of the past, the leadership of the Jamaica Labour Party (JLP) late yesterday threw down the gauntlet during a constituency conference for its candidate for East Rural St Andrew, Juliet Holness.

Predicting that the wife of their party leader was poised for greatness, the JLP hierarchy came full throttle in support of Holness at Jamaica College, located in neighbouring Eastern St Andrew.

"Tonight we are here for a simple reason. So simple that I could ask everyone to go home," declared party emcee Desmond McKenzie. "East Rural St Andrew is finally back where it belongs."

McKenzie said that the "hype, excitement and 'I trick you'" was a thing of the past, in an obvious swipe at outgoing Member of Parliament Damion Crawford.

McKenzie also hit out at Crawford's successor as the next candidate for the People's National Party (PNP), Imani Duncan Price.

"Beauty queen or not, head of money organisation or not, is no longer relevant," he said.

McKenzie added: "No trickster, straight up for the next member of parliament."

Fayval Williams, the JLP standard-bearer for the Eastern St Andrew constituency in which the conference was held, described Juliet Holness as Jamaica's 'first lady' and that East Rural could create history by having, for the first time, the wife of a prime minister representing it, were Andrew Holness to win his seat and his party triumph at the polls.

The JLP candidate for West Rural St Andrew, Juliet Cuthbert Flynn, predicted that Juliet Holness would leave a legacy when she wins, based on the evidence that she has seen among the people, instead of in a helicopter.

"Him lef' Hanover and set up shop in East Rural," declared Gordon.

On entry into the Karl Hendrickson Auditorium at the Jamaica College Old Hope Road complex, photographic images of wife of Juliet Holness were presented.

Daryl Vaz, the member of parliament for West Portland, described the event as "the inauguration of the first lady".

Said Vaz: "You have got the right person at the right place at the right time. She nuh tek nuh chat from no one and is the influence behind her husband's success."

Reacting to suggestions that he and Juliet Holness have been installed for convenience, Vaz quipped, "The JLP is integrated while the PNP disintegrating."