Portia on top - Simpson Miller ahead of Holness in favourability poll 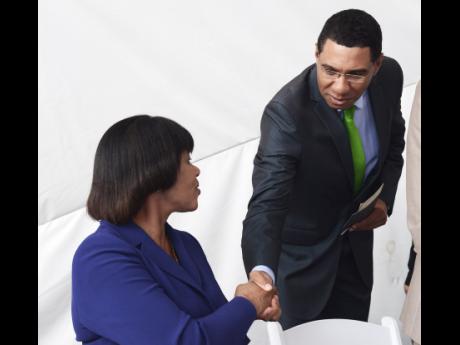 Prime Minister Portia Simpson Miller has rebounded to improve her chance of securing victory in the upcoming general election, after an unprecedented stumble in favourability rating four months ago.

With two weeks to go before Jamaicans go to the February 25 polls, Simpson Miller, gunning for a second consecutive win, has surged past Jamaica Labour Party (JLP) Leader Andrew Holness.

Simpson Miller lifted her political stock from a dismal 36 per cent favourability rating in September 2015 to 45 per cent in February 2016, the latest Gleaner-commissioned Bill Johnson polls have found.

"Her favourablility has increased while her unfavourables have decreased, and that is a very nice position for her to be in," commented Johnson as he spoke with The Gleaner yesterday.

Contrastingly, the exercise carried out on February 4, 5, 6 and 7, found that Holness had slipped marginally from 43 to 42 per cent with another 42 per cent regarding him in an unfavourable light.

The prime minister's positive show in the latest survey is in comparison to Holness' December 2011 favourability rating of 47 per cent when 34 per cent regarded the JLP leader in a unfavourable light.

Johnson suggested that Holness peaked out in September 2015.

According to Johnson, the 23 per cent that were undecided in September has fallen to 16 per cent.

"He is not making a good impression on the people who were unsure how to rate him four months ago."

The nine-point jump has catapulted Simpson Miller from her lowest point in her long political career in September 2015, to just under the 50 per cent level she enjoyed on the eve of the December 2011 general election.

With elections looming large, 42 per cent regards Simpson Miller as unfavourable, a nine per cent drop from the 51 per cent she had to endure in September 2015, but much higher than the 37 per cent four years ago on the eve of the December 29 polls.

As it was at the time of the last general elections and again, in September of last year, 13 per cent say that they were undecided about Simpson Miller.

"The prime minister's numbers aren't the same as they were in December 2011 but given where she was, four months ago, it is a tremendous improvement," said Johnson.

The survey found that despite Simpson Miller's late favourability surge, 48 per cent of respondents are convinced that she should be replaced but this is lower than the 57 per cent who felt similarly in September 2015.

Johnson found in February 2016 that 41 per cent believed that Simpson Miller should continue as prime minister, which is 11 percentage points higher than the 30 per cent who felt so four months ago.

Another 11 per cent declined to express a sentiment as to whether Simpson Miller should remain, the poll of 1,200 voters across 63 constituencies, which carries a plus or minus three per cent sampling error.