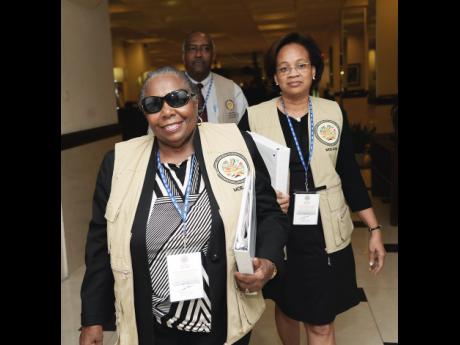 Based on the casting of ballots done by police and soldiers yesterday ahead of a general election on Thursday, chief of the Organization of American States (OAS) Electoral Observation Mission, Janet Bostwick, has expressed satisfaction with the voting process in Jamaica.

Now on its third observation mission to Jamaica, the OAS was invited by the Electoral Commission of Jamaica (ECJ) to make findings on how the execution of the election can be improved.

Bostwick told The Gleaner, "We can say that Jamaica is very far advanced in its preparation and the way in which they conduct elections. Jamaica is a leader in this regard, but there is always room for improvement."

After each mission to Jamaica, the observer team compiles a detailed report with recommendations to the ECJ.

Bostwick says she is satisfied that steps have been taken to implement the recommendations that were made from the elections of 2007 and 2011. Of note, in particular, is the introduction of a campaign finance bill, a recommendation made by the OAS mission from the last election.

The law, however, has not taken effect for the February 25 polls.

Other recommendations concerned the composition of poll workers, which the OAS said was dominated by women, layout of polling stations to accommodate persons with disabilities, and the spacing of voting booths, among others.

According to Bostwick, "Jamaica has become the leader and has set the pace for elections in the region."

As Bostwick and her team of 22 observers, drawn from more than 18 countries, monitor the polls on Thursday, they will be looking, scrutinising, analysing and will once again make recommendations towards the enhancement of free and fair elections in Jamaica.

Representatives from the Caribbean Community and the local Citizens' Action for Free and Fair Elections will also observe the election.

The other members of the regional body comprise experts in electoral management and administration from Barbados, The Bahamas, Dominica, St Lucia, St Kitts and Nevis, St Vincent and the Grenadines, and Trinidad and Tobago.

The CARICOM mission will issue a preliminary statement based on its observations and findings. A report of the general election will be subsequently prepared and submitted to the CARICOM secretary general.