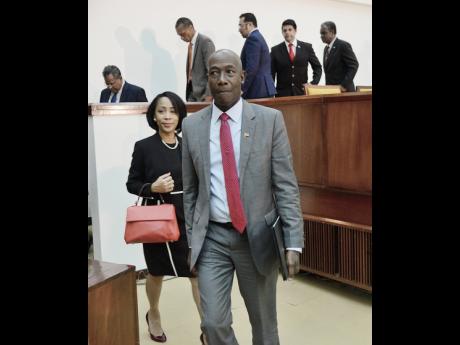 It cost taxpayers $4.6 million for a four-day visit to Jamaica in July by Dr Keith Rowley, the prime minister of Trinidad and Tobago.

The expenditure, which was released to The Gleaner by the Office of the Prime Minister under an Access to Information request, showed that approximately $1 million was spent on dinner and drinks at Vale Royal, the official residence of Jamaica's prime minister.

Rowley was in Jamaica from July 17-21 on an invitation from Prime Minister Andrew Holness as the relationship between the two Caribbean Community countries soured over the treatment of Jamaicans by Trinidadian immigration officials and a growing call by Jamaican businesses for boycotts over alleged unfair trade practices.

While here, Rowley, accompanied by a delegation including his wife, met with members of civil society and the private sector and participated in bilateral talks with government officials on issues such as security, air and sea transportation, energy, immigration, trade, as well as strengthening the Caribbean Community.

A breakdown of the cost of the visit showed that food and drink amounted to $1.4 million, most of which ($1.1 million) went to paying for dinner and the bar for a reception at Vale Royal.

It cost $870,000 for accommodation and about $1.6 million for "other goods and services", which included buying phone cards for protocol staff, tents, fuel, and the washing of cars.

Public affairs commentator Martin Henry has said that the cost should be of no major concern and citizens must expect to pay for visits involving heads of government, which, he argues, are part of the normal business of government.

"I am not at all distressed. Not by this case and by most of the others, which were raised in the Portia Simpson Miller administration. I'm all in favour of careful expenditure, avoidance of waste and corruption, but I am not joining the dollar chase," Martin said, adding that "a visit is quite in order, especially given the stresses and strains" between Jamaica and Trinidad and Tobago over the years.

Dr Morais Guy, opposition spokesman on foreign affairs, said it is "'probably too early" to say whether the cost of the trip was justified.

"I can't say whether it was justified, but in terms of the cost, one cannot see any direct benefit for it immediately because that is not how one expects to gauge whether it was successful or not. It takes some time for these things to happen," he told The Gleaner.

At a press briefing marking the end of the visit, Rowley said he came to avert a "'trade war", noting that "if we had not agreed to take the initiative to put to an end what was festering between our countries, the consequences could have been quite dire for our business communities and for our countries as a whole".

Holness, meanwhile, noting that the relationship between Kingston and Port-of-Spain had been "reset", said: "At the end of the day, there is greater clarity, greater understanding, and most importantly, restored friendship."