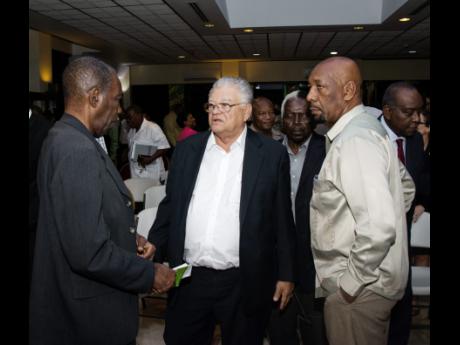 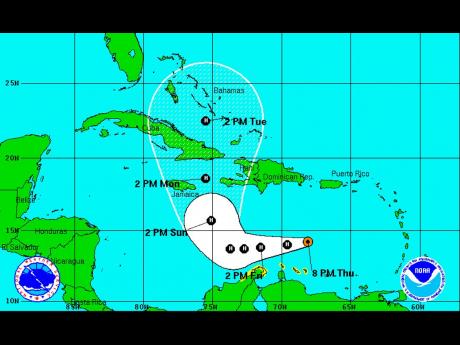 The Government late last night declared that it was prepared to deal with the impending passage of Matthew, which, yesterday afternoon, became the fifth hurricane of the 2016 season.

The system, which is expected to pass near Jamaica on Monday, bringing heavy rains and strong winds, has already devastated sections of the Eastern Caribbean and has left one person dead in St Vincent and the Grenadines.

Not all MPs attended the meeting which ran for more than an hour, but there was consensus among them that Jamaica is prepared.

He also said Holness would be meeting with Finance Minister Audley Shaw with the aim of releasing more money from the Constituency Development Fund to MPs.

"It was a great meeting. We've tried to be proactive in putting the nation on alert. We are prepared," Reid told The Gleaner.

Local Government Minister Desmond McKenzie said parish councils have been told to use money from their parochial revenue fund to finance any necessary drain cleaning.

Opposition MP Horace Dalley commended the prime minister for calling the MPs to a meeting.

Dalley, noting that Holness has committed to addressing concerns about the accessibility to equipment to clear blocked roads and the provision of supplies for shelters, said he hoped MPs would get at least $500,000 each to help with their preparedness and response.

Meanwhile, head of the National Meteorological Service Evan Thompson said up to eight inches of rain is expected to be dumped on the island with the passage of Hurricane Matthew.

"Right now, it's moving westward, but it should make that turn towards the north, and it is expected, at this time, to pass over the Windward Passage, which is between Jamaica and Haiti.

"It should pass us on Monday morning [and] it's expected to be a category two at that time. There's the possibility for it to further strengthen. We expect quite a bit of rainfall across the island. As it moves closer to the east coast, we expect the heaviest activity to be surrounding the eye of the system and extending outward from there."

Along the east coast are St Thomas, Portland, St Mary, and Kingston and St Andrew.

"As it moves westward, the rainfall will decrease somewhat, but we could still get significant amounts of rainfall right across the island, and the wind speeds could at least be up to tropical-storm force even in western parishes," Thompson said.

Meanwhile, the National Water Commission (NWC) is advising customers to store water for use in the event that piped water supply is disrupted.

Jamaica's sole oil refinery, Petrojam, has given the assurance that the petroleum market "will be adequately supplied" with fuel should Hurricane Matthew affect the island.

Winston Watson, the company's general manager, said there is a supply of products to last up to 21 days.

He said plans are in place to extend the opening hours of the loading racks in Kingston and Montego Bay to facilitate adequate access to fuel supplies.

Marketing companies are being advised to stock up on fuel in the event the weather system is confirmed to make landfall.

In the meantime, local authorities in the eastern end of the island say plans are well advanced in the preparation for the gradually strengthening hurricane.

Mayor of St Thomas Ludlow Mathison yesterday told The Gleaner that the Parish Disaster Committee was meeting to fine-tune its plans.

He said two months ago, the Office of Disaster Preparedness and Emergency Management was part of a meeting with a wider stakeholder group and "everybody was on board and knew what was required of them [during the hurricane season].

"[This includes] all the relevant people in the parish - the police, the firefighters, the Ministry of Labour, Jamaica Public Service, health ministry, social security, Salvation Army - and everything was very clear to everybody," Mathison further said.

While noting that the parish council had carried out drain cleaning and other activities months ago, Mathison expressed concern for the flood-prone community of Audley.

"We could clean drain 'til Thy kingdom come, I think Audley is going to need some expertise. Only the experts can help Audley because all sorts of problems are there," he insisted.

As for Portland, Mayor Wayne McKenzie said he has taken note of the recent development and has made certain that the basic structures are in place for the parish council to perform its duties in the event Matthew arrives.

"The entire emergency response team is sensitised and ready. We have been cleaning drains over the past couple of weeks, so we expect to be in a very good position as it relates to our drainage work," he said.

He told The Gleaner that though Port Antonio was a major flood-prone area in the parish, he had concerns about other areas that were susceptible to land slippages.

"Buff Bay Valley, Rio Grande Valley, and sections of the town, the Hope Bay Valley is a steep area, Shirley Castle ... those areas are highly susceptible and the result is that those areas will have roadblocks," McKenize said.

The parish council may not have enough equipment to respond to the blockages that follow the passage of the hurricane, if it does come, and that is a major area of concern for the mayor.

"Based on past experience, we might not have enough to respond in a speedy manner, especially if we are hit hard."