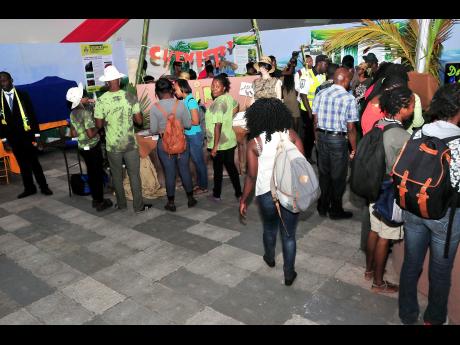 Patrick Planter
University of the West Indies Research Days attracting many persons at the undercroft, where it is being staged. 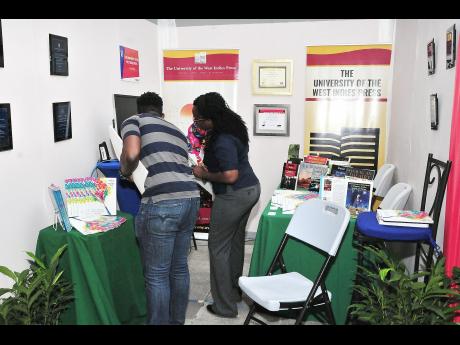 Patrick Planter
One of the booths at the Research Days expo at the University of the West Indies undercroft gets the attention of this man and woman.
1
2

Founding Principal of the University of the West Indies' (UWI) Research Days Sir Kenneth Hall says that the relationship forged between the premier tertiary institution and the private sector is contributing greatly to nation building.

At the launch of the 18th staging of Research Days on January 10, it was disclosed that the UWI, Mona Campus, and the Private Sector Organisation of Jamaica (PSOJ) had a mutually beneficial partnership, where PSOJ member companies would be able to benefit from evidence-based research from the Mona Campus when they focus on areas that contribute to the growth agenda.

In keeping with the agreement, the university will also be paying more attention to those research areas guided by the Economic Growth Council's eight identified areas of growth.

"The greatest development is that the research and researchers are now linking directly with the private sector. From the very first year (2000), we developed an annual publication called Research for Development, which identifies those areas of research which have the greatest impact on the development of the country. When you take a look at the publication, it's clear that all the research items tie directly into varying areas of national development," Hall, who is a former governor general, told The Gleaner at the opening ceremony on Wednesday.

Speaking to how Research Days came into being under his stewardship, Hall cited the need for more widespread public awareness of the work being done at the UWI.

Hall told The Gleaner: "When I came to UWI, Mona, in 1996, I recognised that while research had been taking place on the campus, it was not organised in such a way to convey to the internal and external audiences the extent of research. I thought the best way to achieve this was to have a day set aside to focus solely on research. We have graduation, which reflects teaching, but we had nothing to celebrate the research, so that's how it, conceptually, started."

He added: "The idea was clear from the start. Research Day should be a significant day in the calendar of the university. First, it should bring together all the researchers, but more important, it should be organised in such a way to communicate with the public, government, private sector, and students what research is taking place. I'm pleased with how the event has matured, and the fact that it's now at three days instead of one initially speaks to that growth."