Ricardo Makyn
Justin Gatlin bows at the feet of Uain Bolt after the men's 100m final at the IAAF World Championship yesterday. Ricardo Makyn
The crowd at the London Stadium just could not get enough of Usain Bolt despite his defeat.
1
2
3

He wouldn't be Usain Bolt if he didn't end his career like he led it - with another first.

Bolt closed the lid on a spell that will go down as one of the most dominant and impactful sporting careers ever; with the first-ever bronze medal in his collection of 23 medals at the global senior level.

It was supposed to be a fairy-tale finish, but in the end, Bolt left himself with too much work to do this time. Hampered by another slow start and an abbreviated season, the sprinter struggled to find the power necessary to reel in the fast-starting American pair of Christian Coleman, 9.94 seconds, and Justin Gatlin, with track and field's 'bad boy' crossing the line in first place with a time of 9.92 seconds.

"It wasn't the perfect race, but I did my best and that's what matters. I think I was in good shape to win it, but my start and the first 30m is always important, especially when I'm not in the best shape, so for me, it's one of those things. I did my best," said Bolt.

LISTEN ON SOUNDCLOUD: It's hard to be sad, says Usain Bolt 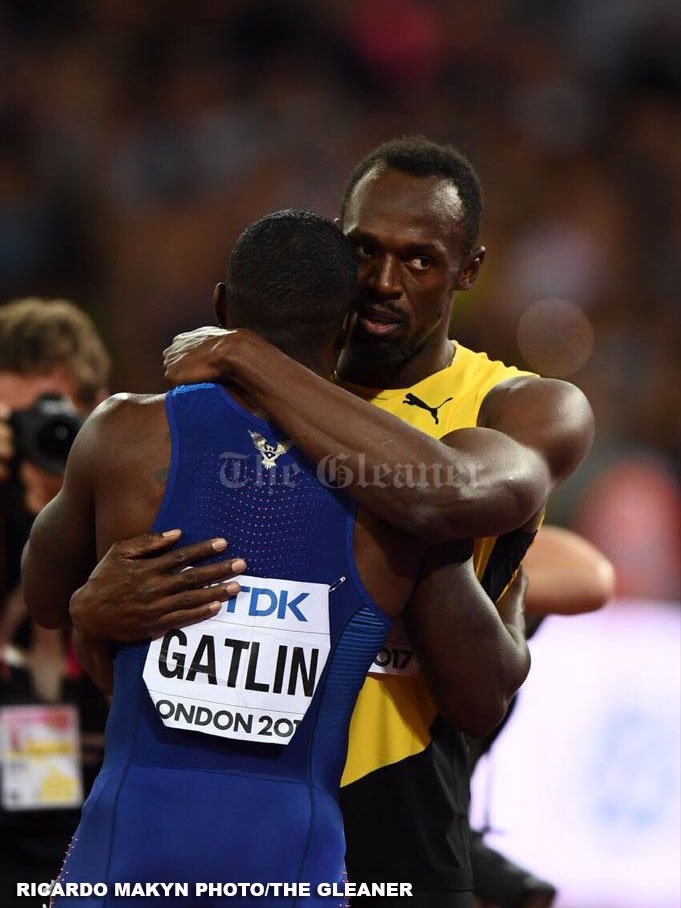 The question that must now be asked is, what next, not just for Bolt, but for the sport, which has spent the last seven years vilifying Gatlin, whose double dope ban made him a target in a period when athletics faced its biggest credibility problem.

Boos rang around the London Stadium at Gatlin's introduction and after he was confirmed as the winner. Bolt himself was far less critical of the American.

"I told him 'congrats, well done'," Bolt revealed of his post-race embrace with Gatlin.

"He deserved it. He worked hard, he came out here and he was ready, so he did well. He has done his time throughout the years. I just look at him as another competitor and today, he was the better man."

Gatlin, for his part, spent much of his time under the lights underlining his admiration of a man that he credited as an inspiration.

"It's not about doing it to Usain. Usain is the man. A win or loss here, he has taken the sport to a new level. You have to imagine him not being in the sport, where would it be? The excitement that he brings, he is a character, he is lovable ... even while competing against him, you want to wish him the best," said Gatlin, who was winning his second world title 12 years after his first.

Still, even in defeat, Bolt, as expected, was the centre of attention as fans said goodbye to their champion.

How will track and field cope without the man that has, for the last decade, acted as the buffer between all that is right and all that is wrong in the sport?

Bolt's performances and personality and, perhaps most important, the credibility that he provides in a sport that has struggled to get its fans to believe what they see, have made him not just a superstar athlete, but the superstar athlete that guarantees relevance.

The fact that he is the only sprinter who has gone 9.79 or lower, who was never implicated in an anti-doping offence adds to his appeal and aura; adds sponsors and big TV deals; packed stadia in unconventional markets and never-before-seen attention to a sport, which outside of its poster boy, remains 'minor' in the grand scheme of things.

'One of the greatest'

His dominance created a dependency that those in the corridors of the IAAF will no longer be able to truly count on no matter how many ambassadorial tours the Jamaican embarks on in the next few years.

"I have proven to the world that I am one of the greatest athletes and tonight will not change anything. I have always done my best and tried to keep the sport in a positive light," Bolt added.

It wasn't quite the lightning's final strike, but more of a roll of thunder in the night, but his legacy was never on trial here. He shook the world for eight glorious years, now athletics must find another bastion.