Hurting women - Many traumatised after having abortion 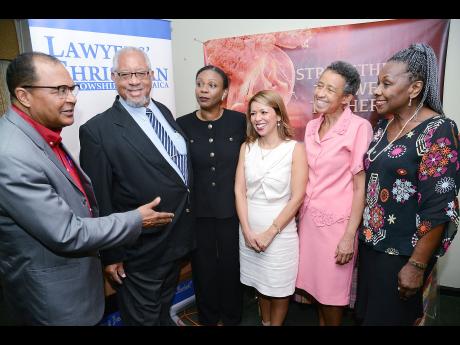 As the executive director of a pro-life organisation, Christina Milford interfaces with women and girls on a daily basis who are experiencing extreme guilt and trauma after aborting their babies.

"We recognise that abortion kills babies and hurts women. That is a statement that cannot be retracted," she said.

Although she launched the Montego Bay-based Pregnancy Resource Centre of Jamaica in 2006 to help women to pursue other alternatives to abortion, she said some still chose to abort for varying reasons.

"Our women [who] have come to me in a post-abortive state are all that I have seen hurting women," she said.

Milford got pregnant after being raped several years ago. Like many of the women who she sees at the resource centre, she too wanted to abort her baby, but her doctor advised her against this. Through her work, she tries to offer similar advice to women and provide them with counselling and other resources.

"We build relationships with our women, we cause them to see how valuable they are, how valuable the unborn is. We give them information as they require, and up to this time, a very large percentage has chosen life for their babies," she said.

Milford was one of several speakers at the launch of a campaign last week to encourage women to pursue other alternatives to abortion. The 'A Time for Life' campaign was launched by the Lawyer's Christian Fellowship (LCF) with the support of the clergy.

"So I am thinking about the young woman, the teenage girl who, having been raped, didn't even recognise that pregnancy had taken place until the child was over six weeks in her womb. Her parents were then brought in, they took her for an abortion and they didn't want to talk about it at all. This girl began to suffer," she shared.

She noted that, "Years later, I saw that young lady and she told me she has had psychiatric help, she has been admitted in hospital for situations pertaining to that, and she was still struggling with the effects of abortion."

She said she has seen "cases after cases" where women abort their unborn baby and were unable to live with their decisions.

"Abortion is bloodshed, and there is no shedding of innocent blood without some kind of recourse, and it takes a toll on the mother sometimes way down in life," she insisted.

The Reverend Peter Garth of the Jamaica Evangelical Alliance, said he, too, has seen the negative effects abortions have on women. With that in mind, he advises women to seek counselling before making what he believes is a life-changing decision. He stated that Christian counsellors and psychologists are always available to provide such counselling.

"There are trained pastors who are willing to give free counselling, and for years we have been doing this, it is just that the public is not really aware of what is happening and the amount of free service that is given by professionals within the church," he said.

He noted that some of those who abort their children generally suffer from depression.

"The psychiatrist or the doctor cannot write a prescription for guilt, and guilt is what follows abortion," he said.

"Pastors are bombarded with many cases of people who are suffering from trauma and that is something for the Ministry of Health to recognise," he added.