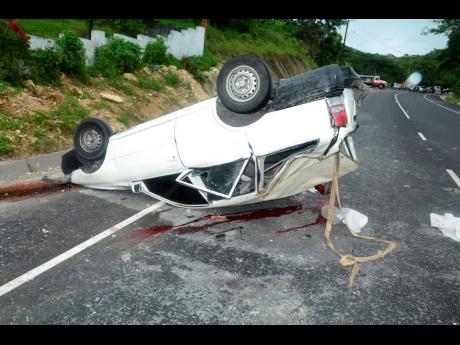 Hopeton Bucknor
The ill-fated car that crashed in Ferris, Westmoreland, on Thursday.

Yesterday turned out to be a bloody Labour Day in Westmoreland as while many residents were busily giving their communities a facelift, three men and a dog perished in three separate traffic crashes in the parish.

The three victims have been identified as 20-year-old Odain Morgan, labourer of Hartford district; 49-year-old Devon Morrison, of Shrewsbury district; and 21-year-old Andrea Daley, of Bartley Street, in Savanna-la-Mar.

According to reports, the first of the two accidents occurred about 6:30 a.m. Morgan was riding his motorcycle along the Cave main road when he reportedly lost control, hit the dog, and then crashed into a chain-link fence. When bystanders rushed to Morgan’s assistance, they discovered that both he and the dog were dead.

“Mi always hear people seh dat a man dead like dog, but is the first mi ever see it … . Di man and di dog dead, so di man dead like dog,” said a resident in summing up the accident, which attracted scores of onlookers.

In the second crash, which occurred about 10:30 a.m., Morrison was riding a Honda 50 motorbike along the Morass main road in Hartford when he was reportedly hit from behind by a Voxy minibus, which was travelling in the same direction. Morrison, who sustained injuries all over his body, was rushed to the Savanna-la-Mar Hospital, where he was pronounced dead.

In the last of the three accidents, which occurred about 3:30 p.m., Daley and two other men were travelling in a Nissan AD Wagon motor car along the Ferris main road, which was recently paved under the multimillion-dollar road-improvement project linking Mackfield, when the vehicle got out of control, crashing into a wall before overturning.

Daley, who was on the back seat, sustained multiple injuries and died on the spot. The driver and the other passenger reportedly fled the vehicle and have not been seen since.

Since the start of the year, 16 persons have been killed in road crashes in Westmoreland.