'It's not even mine,' Pinnock protests laptop seizure as he is arrested Arrested president of the Caribbean Maritime University (CMU) this morning protested as law enforcement officers seized a laptop among other items during an operation at his Hellshire, St Catherine house.

"It’s not even mine, it’s my daughter’s," Pinnock said. 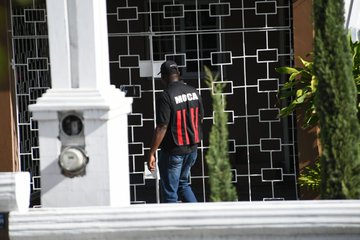 IN PHOTO: A police investigator at the home of former education minister Ruel Reid.

Lawrence is also a consultant at the CMU.

Reid, his wife Sharen, their daughter Sharelle, and Brown Lawrence have also been arrested. 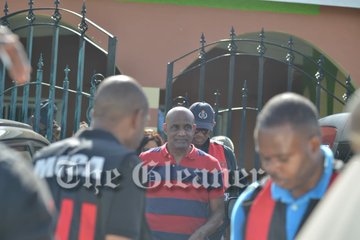 IN PHOTO: Fritz Pinnock being escorted by MOCA detectives

As the police sought to seize the laptop computer at Pinnock's home at daybreak, his lawyer also intervened, telling the cops that electronics were not covered under the warrant.

"Challenge it in court," a cop responded.

During the four-hour operation, investigators searched a Suzuki Vitara, a Suzuki Jimny, a Honda Element and a Mitsubishi Pajero at Pinnock's house and confiscated several documents.

The Pajero is registered to the CMU.

A Honda Accord Sport which was also parked at the property was said to be owned by someone else.

Approximately 9:20 a.m, Pinnock was taken away by police personnel in unmarked vehicles.