Kanye worth the wait, says fan 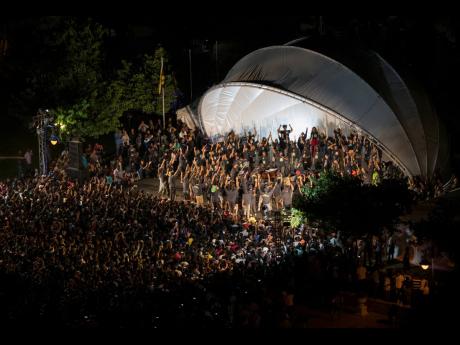 Middle-aged Sonya Johnson was seated on a bench at the Emancipation Park in New Kingston eagerly anticipating the performance of Kanye West at his Sunday Service Pop-up Concert on Friday evening.

She had travelled with a group of friends to take in the mega-star American rapper’s free concert, and nothing was going to stop Johnson and her friends from enjoying it.

“I expect to hear some great gospel songs. I like how the young man handles himself. I am willing to wait,” she told The Gleaner.

But Johnson was, however, unaware that West had recently declared his conversion to Christianity.

“I didn’t even know. All things are possible, however, even though everybody is using gospel to make money these days,” Johnson said.

West was in his element last night, and when his 120-strong choir opened proceedings with the Prince of Peace, His Name is Jehovah to the strains of Damian ‘Junior Gong’ Marley’s Welcome To Jamrock, Johnson and her friends rocked to the gospel-reggae beat.

West then segued into a version of Mr Vegas’ I Am Blessed, and the tempo was raised even further.

Carl Murray lives in Portmore, St Catherine, and works in New Kingston. He just happened upon the free concert and decided to stop by.

West’s concert was not promoted extensively, and it was only two days ago that news broke that the rapper would be performing on Jamaican soil.

“I never know about it, but from the look of it, I think I will stay,” Murray said.

He, too, seemed caught up in the music and waved away a reporter as he jammed to the music.

West has reportedly spent US$1 million (J$139 million) to host the concert.

Although only a few hundreds had gathered minutes before the concert commenced, the numbers swelled as the night drew on.