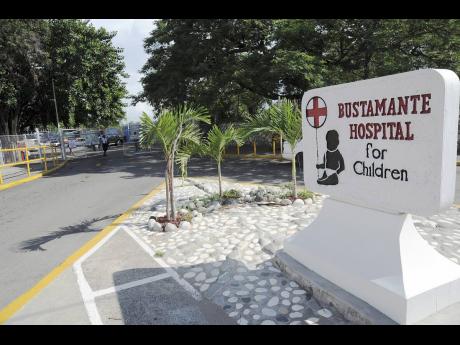 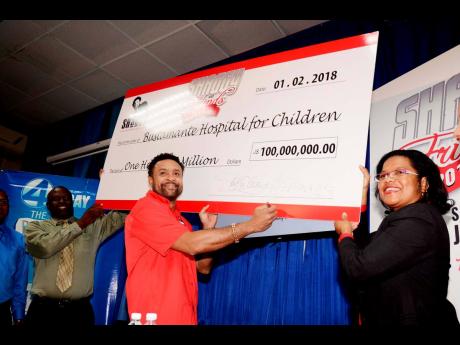 File
International recording artiste Orville ‘Shaggy’ Burrell (centre) shows off a symbolic cheque for $100 million as Drs Brian James and Michelle Ann Richards Dawson of the Bustamante Hospital for Children look on, during a handover ceremony held at the hospital on February 1, 2018.
1
2

Almost two years after the successful staging of the biennial Shaggy and Friends concert, the Bustamante Hospital for Children is still anxiously waiting to receive the benefits from the charity event which reportedly raised $100 million.

The concert was hosted by international recording artiste Orville ‘Shaggy’ Burrell on January 6, 2018 with support from the Shaggy Make a Difference Foundation, which is co-directed by his wife, Rebecca Burrell.

Contacted by The Sunday Gleaner, the hospital’s chairman, Kenneth Benjamin, confirmed that neither the Intensive Care Unit (ICU) beds that were to be purchased from the proceeds of the charity event nor the money raised has been handed over.

“We haven’t received the funds yet,” Benjamin told The Sunday Gleaner last week.

Since its inception in 2009, the Shaggy and Friends concert has reportedly raised more than $400 million for the hospital, which is the only one of its kind in the English-speaking Caribbean. The last staging of the event was held on the lawns of Jamaica House and featured a star-studded line-up with performances from international artistes Sting, Wyclef Jean, and a number of Jamaican favourites.

In addition to money raised from tickets, which were sold for as much as $26,000, several sponsors came on board to support the charity concert. A symbolic cheque for $100 million was handed over to the hospital at its Arthur Wint Drive location in February 2018.

Last week, Rebecca Burrell acknowledged that the money has yet to be handed over to the hospital, but maintained that it was never the foundation’s practice to give the hospital the money that is raised.

“Our policy is, we purchase equipment for the hospital and, basically, we meet their needs list based on that. But we have never handed over actual funds,” she told The Sunday Gleaner.

“The concert was last year January and, in truth and in fact, we have been doing a whole lot of housekeeping and switching over a lot of things in terms of what our mandate is, and that kind of stuff internally with accountants and everything on our end.”

She added: “It has just been a series of events that has delayed [us], some on our part, some on the part of the hospital, and how things are done down there. I don’t think there is any one person to blame. It is not a matter of it won’t be delivered. It will be, it is just a matter of when.”

Mrs Burrell told The Sunday Gleaner that the focus of the 2018 staging of the Shaggy and Friends concert was to raise funds to purchase five beds for the hospital’s ICU, but that the existing ICU space would need to be expanded to accommodate these additional beds.

Hospital administrators were hoping that, since that plan has not yet been realised, the money could instead be used to fund more pressing needs, such as the purchase of beds for the wards.

“Recently, we have had a lot of problems with bed capacity, and we are in the middle of trying to erect some more buildings for more wards, so we can have more beds,” Benjamin explained.

“We are getting a lot more patients than we used to, and there are seasons where there are so many kids coming down with all sorts of things that are seasonal, and we just don’t have the capacity at the hospital to accommodate them.”

The Sunday Gleaner understands that an increasing number of children are being admitted with symptoms associated with dengue fever and, with the influenza season now in full swing, some children who should be admitted are being sent home due to the shortage of beds on the wards. A partnership was recently forged with The University Hospital of the West Indies to treat some of these children at that facility.

The Sunday Gleaner understands that the hospital’s efforts to secure donations towards purchasing beds have been impacted by the perception that the funds from the most recent Shaggy and Friends concert have been handed over.

Mrs Burrell said a senior member of the hospital staff had relayed the desire to have the money spent on beds instead, given the current dilemma, but that she had to take into consideration the fact that this was not the focus of the 2018 fundraising efforts.

The foundation’s co-director said, however, that, based on recent dialogue, Shaggy has expressed his intention to use a portion of the money earned from his performance in the upcoming Little Mermaid Live production to purchase beds. The multi-Grammy-winning artiste had stated in a previous media interview that there would not be a 2020 staging of the Shaggy and Friends concert because of his busy schedule.

Mrs Burrell said the foundation usually goes through a supplier overseas to purchase equipment for the hospital, following the fundraising concerts, and these are then shipped to Jamaica. She stated that while the majority of the equipment is new, some is refurbished.

She further explained that one of the reasons for the delay in purchasing the promised beds for the ICU unit is the fact that they were still focused on purchasing equipment for the catheterisation laboratory (cath lab) which was officially opened in April this year. The lab is part of a multimillion-dollar investment made by several partners to enhance the delivery of cardiovascular services to children.

Since The Sunday Gleaner first contacted hospital administrators and Mrs Burrell on the matter last week, the parties have had dialogue on the way forward.

Minister of Health and Wellness Dr Christopher Tufton said he was aware of the current situation and he has reached out to Shaggy.

“They have some concerns, we have some, and we have written and we are awaiting a response,” Tufton said.