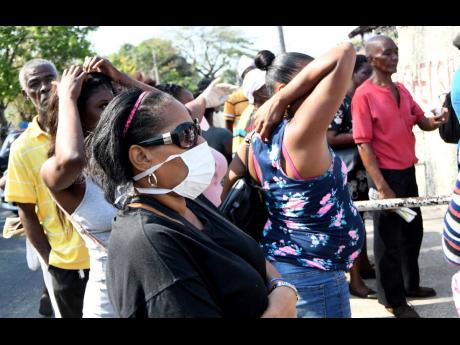 Rudolph Brown
Members of the public wait outside the Comprehensive Health Centre on Slipe Pen Road in Kingston yesterday. However, social-distancing guidelines appear to be lost on them as they stand close to each other before entering the health facility. With the onset of the highly contagious COVID-19,` members of the public have been urged to observe social-distancing protocols.

The Corporate Communications Unit (CCU) has confirmed that a member of the Jamaica Constabulary Force (JCF) has tested positive for the coronavirus.

According to head of the CCU, Senior Superintendent of Police (SSP) Stephanie Lindsay, the policeman recently returned from overseas and, based on the protocol, was placed in quarantine. While there, he began exhibiting symptoms of the virus and was tested. The result came back positive.

Lindsay said that the cop was doing well. “He is responding to treatment and we continue to lend our support. We continue to sensitise our members and encourage them to pay attention to the advisories from the Ministry of Health,” she said.

The SSP explained further that Commissioner of Police, Major General Antony Anderson, has been visiting police stations across the island to sensitise members on taking the necessary precaution while on the job.

She told The Gleaner yesterday that more than 100 gallons of hand sanitisers have been purchased and distributed to members across police divisions. One hundred and twenty four thousand pairs of gloves, more than 7,000 masks, 2,300 disinfectant sprays and more than 50 hazmat suits have been distributed to police personnel, the senior cop reported.

Lindsay highlighted too that owing to the COVID-19 crisis and the demand for hand sanitisers, the cleansing agent has been in short supply. She said that every effort was being made to ensure that personnel have access to hand sanitisers.

“There is a scarcity in the supply, but the suppliers have placed us as priority, so once it is available, we get it. Based on that we have to prioritise in terms of who gets first. The focus is on first responders who are out there, such as persons who work at high-risk areas such as the cells,” she said.

“We have to sanitise everything there because we want to keep our cell population healthy and COVID-19 free. We have to ensure that those who work at the borders and in other critical areas are on the priority (list).”

A hotline has been provided for police personnel to provide feedback on the items they are in need of.

“The advice to our members is safety first. We don’t want them to put themselves at unnecessary risk of contracting the virus,” Lindsay asserted.