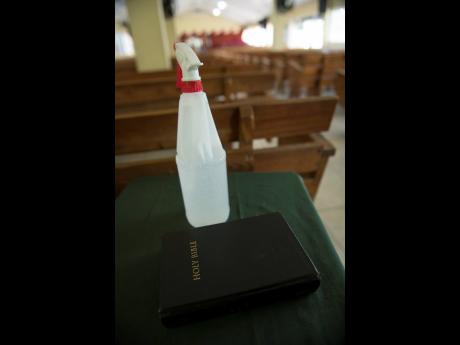 The Ministry of Health and Wellness is to begin doing random sampling of hand sanitisers being offered to customers entering business places.

The development follows an incident brought to its attention by The Sunday Gleaner last week about a Manchester resident whose hands were harmed after he accepted hand sanitiser at a store or stores in the capital.

The affected customer, a 48-year-old civil servant, could not pinpoint the exact store or stores, saying he had visited several a couple days before he detected that something had gone wrong.

Director of Standards and Regulations at the ministry, Cynthia Lewis Graham, said there had been no previous complaints about negative reactions to hand sanitisers. However, she said the Manchester issue was of deep concern.

“We would want to have the complaints coming in,” she said.

Lewis Graham acknowledged that manufacturers or store owners may be using inappropriate ingredients in their hand sanitisers. At the same time, she has sought to explain that people may have negative reactions to the products, depending on the active ingredient that it used.

The health ministry recommends either 60 to 70 per cent ethanol or 75 per cent Isopropyl alcohol.

However, Lewis Graham said some manufacturers may add fragrance and a moisturising agent, which could pose a problem for some users. Even worse may be the cross-reaction of a hand sanitiser offered at one store with the residue of another previously used by a customer at another business place.

“Once we have that information and we have the complaints, we would need to put out an advisory,” she said.

Lewis Graham said the structure already exists in the ministry for random surveys and the authorities would only now need to agree on a strategy to seek to begin the work.

Carry your own sanitiser

In the meantime, the standards and regulations director is encouraging persons, especially those with a history of sensitive reaction to some products, to carry their own hand sanitisers.

“If you carry your own sanitisers, you are using the same product through and through, so the risk of having that chemical reaction is actually far reduced,” she said.

In March, the ministry issued a statement advising entities that they should not deny entry to anyone who refuses to use unlabelled or unknown substances to sanitise when entering establishments.

It also said establishments should ensure that only approved sanitisers are being used, warning against mixing chemicals and urging that containers be appropriately labelled.

The health ministry is encouraging persons who may have had adverse reactions to hand sanitisers to make official complaints to its standards and regulation unit.

Have issues with hand sanitisers?

Standards and Regulations Division, Ministry of Health and Wellness

· The brand of sanitiser being used

· The name and strength of the active ingredient. This may be shown as Alcohol (ethanol 60 -70% v/v or Isopropyl Alcohol 75%)

· The name and address of the manufacturer

· Other ingredients in the product

· Use(s) e.g. Use as a sanitiser to help reduce pathogens than can cause disease

· Warnings e.g. Flammable; keep out of reach of children, not to be taken by mouth

NOTE: The use of products like bleach, vinegar, hydrogen peroxide alone or when mixed are not encouraged as they can cause harm to human skin and should be avoided.

– Source: Ministry of Health and Wellness