Woman weeps as infant’s dad, another slain in St Ann 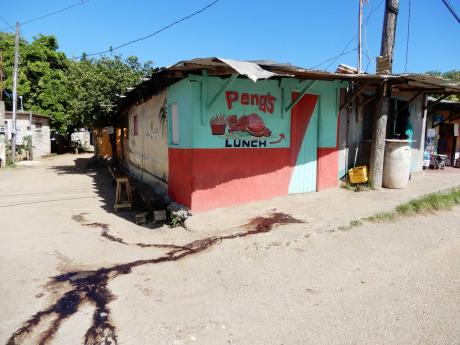 Less than 24 hours after the father of her three-week-old baby was murdered in his restaurant in Discovery Bay, St Ann, Shante was still in a state of shock, her life torn apart by the brutality of the act.

With the baby in her arms, she sought to mouth her melancholy on Tuesday, but only tears gushed as she dashed back inside for consolation.

Other family members were grieving too and could hardly ease her pain.

The police say shortly after 7 p.m. on Monday, the child’s father, 21-year-old Omar Dennis, otherwise called Tall Dog, of Discovery Bay and Brown’s Town, was at his restaurant when a white Toyota Axio motor car stopped at the front of the building. One man armed with a handgun alighted from the back passenger seat of the car, entered the building, and fired several shots at Dennis, hitting him all over his body. He died on the spot.

Two other persons were shot in the incident, one fatally.

He has been identified as 52-year Dwight Knibb, otherwise called Bobo and Rasta, of a Runaway Bay address. He, too, died on the spot.

Another man was Injured and admitted to hospital.

Speaking to The Gleaner later, Shante said she was at home when she heard gunshots and saw people scampering.

“Everybody was wondering what was happening out there, so everybody run,” she said.

She recalled hearing about seven or eight gunshots.

When it was revealed that it was her common-law husband who was murdered, the news hit her like a brick wall.

“I can’t explain, I can’t explain how I felt,” she said. “The baby is just three weeks and four days. Everybody (family) taking it very hard.”

She described Dennis as “a quiet person who don’t trouble anybody”.

The couple lived at the house with the infant and other family members. No one else there wished to speak to the press.

A trail of blood from the sidewalk in front of the shop, to the road, told of the horrific episode that has left the police searching for motives for the latest gun killing in St Ann.

Monday’s double murder means that the gun has taken three lives in two days in St Ann, after a police killing in St D’Acre on Sunday.