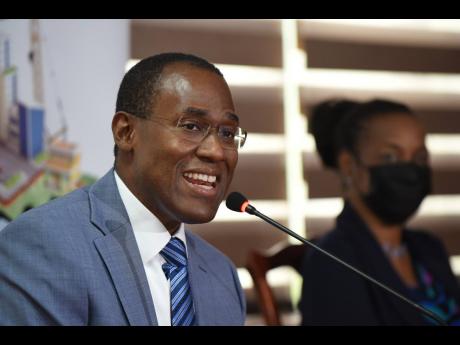 A total of $1.8 billion has been dedicated to the procurement of laptops and tablets for students in the Jamaican education system.

Finance Minister Dr Nigel Clarke said that the $1.8 billion excised from the budget of the Ministry of Education, Youth and Information and the Programme of Advancement Through Health and Education (PATH) allocations represented transfers to the Ministry of Science, Energy and Technology.

The adjustments were announced on Tuesday as Clarke tabled the third Supplementary Estimates in Parliament. The 2020-21 Budget has been slashed by $3.5 billion from the programmed $853.83 billion to $850.24 billion.

The money transferred to the science ministry will be used by e-Learning Company Ltd for the procurement of laptop computers for welfare students, Clarke told The Gleaner on Wednesday.

“The Ministry of Education had engaged the Ministry of Science to procure the laptops on its behalf. It is still the MOE’s programme, since the laptops will go back to them, but the truth is that the money has to be transferred for it to work,” he said.

Clarke said that the education ministry engaged the science ministry as its procurement provider.

The finance minister said that the Government remained focused on supporting the education ministry’s programmes, especially for the most vulnerable, during the ongoing coronavirus pandemic.

Clarke also said that the postponement of payments for 30 fire trucks to fiscal year 2021-22 would not affect the delivery schedule.

The Forestry Department’s budget of more than half a billion dollars now falls under the Ministry of Housing, Urban Renewal, Environment and Climate Change following reassignment after the general election in September 2020.