Despite danger, some homeless ditch shelters for streets 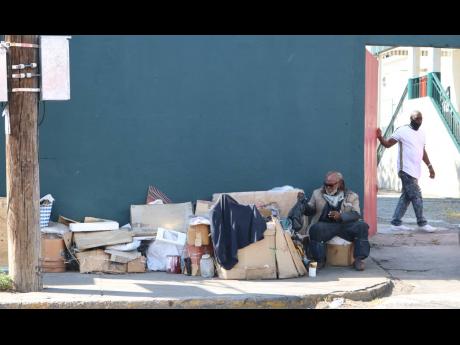 Photo by Christopher Serju
A homeless man sitting outside the gates of Palace Amusement’s Carib 5 cinema in Cross Roads, St Andrew, with all his worldy possessions yesterday. At least six homeless men were attcked on the streets of the Corporate Area on Sunday night.

The attack of six homeless persons as they slept on the streets of the Corporate Area on Sunday night, leaving at least four dead, has triggered condemnation as the police try to determine who was responsible for the fatal assault.

The men were chopped in two separate incidents, and the uncertainty as to whether they were coordinated by a group of persons or an individual – including someone among their ranks – has many homeless persons in the capital city and elsewhere on edge.

Nurse administrator at the Montego Bay-based Committee for the Upliftment of the Mentally Ill, Joy Crooks, told The Gleaner that it has been an uphill task trying to get some hapless people off the streets and into night shelters.

She explained that many homeless people are averse to using the shelters provided by the State, a situation which is oftentimes made worse by mental problems.

“Part of this thing of being on the street and being homeless, especially those of unsound mind, there are other thoughts and disordered thinking going on in their brain as to how they process the message that outdoors is safer. These are either symptoms relating to their illness or diagnosis, where they get paranoid that they are in danger if they cannot be outside, or some just cannot take the closed environment, the restrictions and the order and discipline that one has to endure sleeping in a night shelter,” she told The Gleaner.

“So just to have their own way and to go by whatever thought is directing them at the time, they prefer to stay out in the open, no matter what the weather – rain or whatever it is. Many of them will take the food and the clothing that you give them, but when it comes to relocating them to a shelter, it is very difficult to get some of them to cooperate with you. They see it as a sense of freedom and independence and the safety factor doesn’t really come into it because in their thinking, they are safe and can defend themselves should the need arise.”

Crooks noted that there has been a growing trend of increasing attacks on the homeless globally, including in many developed countries.

“It’s not just a Jamaican problem; it’s worldwide,” she said yesterday, referencing the United States, where a study by the National Coalition for the Homeless found that over the last 17 years, at least 1,657 homeless people have been the victims of violence perpetrated just because they were unhoused at the time. This number includes 428 men and women who lost their lives.

In the early 1990s, the National Coalition for the Homeless noticed that a growing number of cities were passing ordinances banning everyday activities carried out by the homeless. Bans on panhandling, camping, or even sharing food in public places have since become commonplace in cities across the United States, even as poverty and homelessness have been increasing.

Such actions have triggered a message that the homeless do not belong in public spaces, which some people use as internal justification for attacking them.