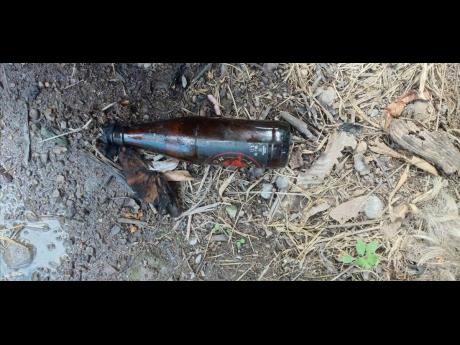 Contributed
A Molotov cocktail thrown into the Lionel Town house in which eight people lived. 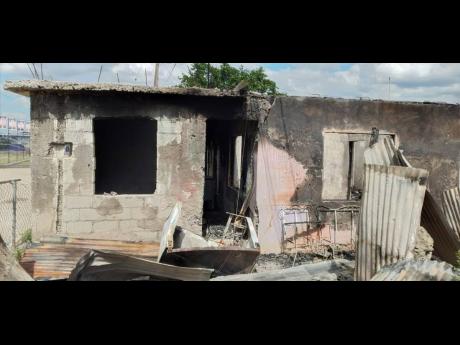 Jennifer Forbes Thomas of Rocky Point in Clarendon says her family is still reeling from the trauma of their home being firebombed last Thursday.

Relating her experience to The Gleaner, she said she was sleeping when she heard banging at her window and the sound of glass breaking, followed by an explosive sound.

In no time, the house was a furnace of fear and screams.

“I was scared that probably a gunman was outside the door. I didn’t see any gunman or anything, so mi run cross the fence and call mi neighbour,” she said, adding that her husband rushed to throw water on the fire.

A Molotov cocktail, or ‘bottle bomb’, was found inside the house where Forbes Thomas lived with her husband and her daughter.

“The whole family of us traumatised. Mi just a try fi heng on and see what can be done,” Forbes Thomas said.

Neighbours worked feverishly in a bid to extinguish the blaze. A mattress and some clothes were lost.

“Mi window dem lick out. Mi affi put zinc and board on it right now,” the matriarch said, sharing that the family is still living in the house as they have no other option.

Forbes Thomas is appealing for help with the donation of a mattress as well as assistance in having the windows replaced.

Such acts of criminal violence are not alien to Rocky Point, a seaside community in south-central Jamaica, but a rash of firebombings in just a week could hint at a purge.

The Clarendon district came under renewed scrutiny after a 12-seater plane crash-landed on the White Sand Beach on the evening of January 23.

The twin-engine aircraft is deregistered and its ownership is domiciled in Mexico. Its occupants still have not been identified or located.

The incident is now the subject of a transnational investigation.

Forbes Thomas believes that Thursday’s attack may be linked to a feud involving her son in nearby Lionel Town. Her son, she said, had been the victim of gunshot wounds in an attack born out of a grudge.

She theorises from the escape route that Thursday’s arsonist was an outsider unused to the community’s terrain. While jumping over the fence, an assailant’s clothes got caught by wire and he fell into clumps of prickles. He eventually escaped.

“We realise dat is not anybody from dis surrounding here, neither from Portland Settlement nor Rocky, as they know the place good, so they would know how to get away instead of going cross there because they would know that a fence is there and kassia is there,” Forbes Thomas said.

Four homes in the communities of Lionel Town and Rocky Point were attacked with Molotov bombs last week.

On Tuesday, February 2, a mother, her daughter, and the daughter’s partner came under attack in their two-bedroom concrete home in Lionel Town.

It is understood that the occupants of the house heard the dogs barking following loud explosions like gunshots at the front of the house.

After shooting subsided, the daughter’s partner was found to be suffering from gunshot wounds to his right thigh. The house was then set ablaze with a Molotov cocktail.

The daughter’s partner’s house, which is close by, was fired on and also set ablaze.

The fourth incident happened in Lionel Town some time last week when a family of eight, including a six-week-old baby, came under attack from gunmen.

One member from the household who did not want to be named said that about 11:30 p.m., gunmen invaded the home via the front window and fired several shots while tossing a firebomb into the house.

Clarendon has recorded nine murders between January 1 and February 5 this year, two fewer than for the comparative period in 2020. Jamaica’s murder toll has climbed by seven per cent, or 10, year-on-year up to February 5 in 2021, to 146. One hundred and thirty-six people were murdered in the corresponding period last year.