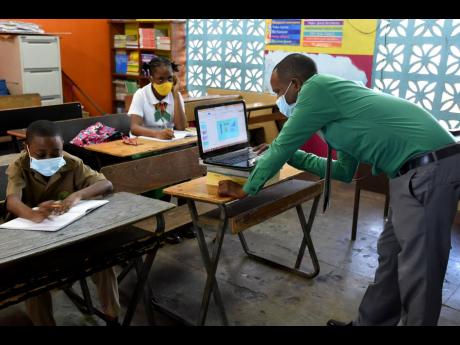 Kenyon Hemans/Photographer
Courtney Waite juggles face-to-face and online classes for third-graders at Mona Heights Primary School on Monday. The school has adopted a dual method to engage students because of coronavirus restrictions. 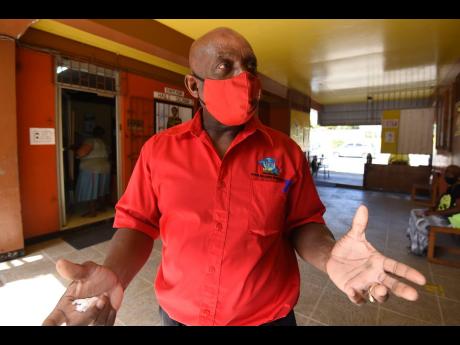 Despite calls by the country’s main teachers’ lobby and the umbrella parent group for an immediate end to face-to-face classes, Education Minister Fayval Williams has rejected those appeals, saying schools are governed by the standard workplace policy on COVID-19.

Jamaica has recorded its largest sustained series of infections over a five-day period, totting up 1,325 cases of the coronavirus that threaten to swamp state hospitals and worsen the public healthcare crisis.

Those cases include a small but snowballing number of cases that have disrupted an already stop-start academic year which started two months late with a November pilot in 2020.

Happy Grove High in eastern Portland was the latest school to suspend face-to-face classes after a staffer reportedly tested positive for the virus.

The decision was disclosed by principal Monique Grant-Facey, who issued a text message on Monday stating that despite deep-cleaning of the school plant, fear among students and staff was sufficiently compelling to trigger the calling off of in-person sessions until after the midterm break ends on February 19.

The teacher has not visited the school since January 22.

Williams pressed back against the pro-lockdown movement that has found its voice in the Jamaica Teachers’ Association, arguing that the Holness administration was committed to a case-by-case analysis.

“If somebody has COVID, then there is a list of guidelines on how you handle it. You sanitise the area and then you carry on; similarly with the schools,” she told The Gleaner on Monday.

The education minister also defended the right of administrators to shut down their own schools in the wake of coronavirus outbreaks.

“We are saying there is nothing wrong with that, and we support that as well,” said Williams.

More than 400 schools have been approved to restart face-to-face classes as at February 5, but only 240 have resumed that modality, Williams said.

Dr Parris Lyew-Ayee Jr, the architect of the Government’s vulnerability index assessing a mix of demographic, geographical and environmental variables, said that if the Ministry of Education was operating the model on the fulcrum of the October plan he had produced, it was indicative that a problem had arisen.

“When you see a surge in cases, it suggests something is happening on the outside. Therefore, there has to be an impact on the inside,” Lyew-Ayee told The Gleaner on Monday.

“When you see this happening, you wonder whether or not somebody went too fast or we started getting a little careless or something.”

Lyew-Ayee, director of the Mona GeoInformatics Institute, disagreed, however, with a blanket closure of schools, preferring an individualised approach.

But the National Parent-Teacher Association of Jamaica (NPTAJ) urged the Government on Monday to “review its decision on any further ongoing face-to-face classes”. The organisation called for the postponement of team sports, including the popular Boys and Girls’ Athletics Championships.

The NPTAJ wants the Ministry of Education to test at least 50 per cent of students and all school employees, including teachers and administrative and ancillary staff, before discussions proceed on in-person classes.

School administrators on the ground are still divided on the reopening strategy.

Acting principal of Mona Heights Primary, Alex Hepburn, has vouched for the integrity of infection-control guidelines imposed to protect students.

“We are keeping them safe and we are giving them an education,” he said, though adding that he would not coerce parents in sending out children.

Christopher Clarke, 37, agrees. His daughter is in third grade at Mona Heights Primary.

“I don’t have a problem with it because I want the kids them to have better education.”

Anthony Hall, whose son is in grade six, said that he is satisfied with the safety protocols surrounding the rotational basis of class attendance, with students reporting for school on alternating days.

Meanwhile, grade 10 student Philip Brown, who attends high school, said that he does not want to return to online classes despite having to travel to and from Spanish Town on crammed buses. He is preparing for an assessment at the Caribbean Secondary Education Certificate level and has found online learning frustrating.

However, a primary-school principal from west Kingston who requested anonymity believes that health should trump the roll-out of face-to-face classes. She said that the widespread non-compliance with social-distancing and other safety rules was fuelling the wave of infections.

Lorenzo Ellis, headmaster of Haile Selassie High, disclosed that it has been hard work getting students to maintain the wearing of masks. Only grades 10 and 11 students are attending in-person classes at Haile Selassie.

Ellis is insistent, though, that analysis of the data culled from the GIS mapping model should be a key determinant on the next step for schools.