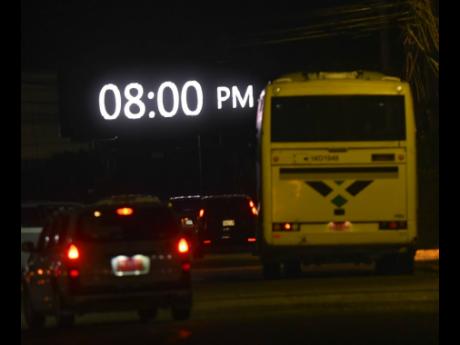 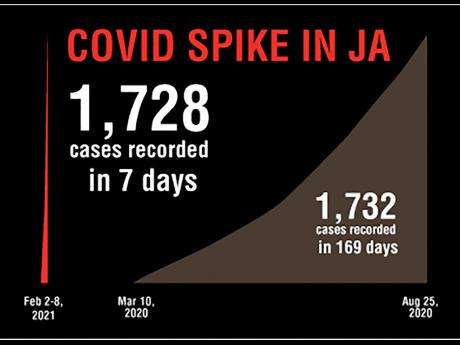 The Government’s imposition of tougher curfew restrictions in the wake of record one-day coronavirus infections has been cast by business interests as a crippling blow to an already tanking economy that would make recovery much harder.

That reaction comes amid an unprecedented surge in infections over the last seven days, climaxing with 403 cases on February 8.

Effective today, the islandwide curfew will commence at 8 p.m. and end at 5 a.m. daily. The lock-off previously started at 10 p.m.

The measure will be in effect until February 24, Prime Minister Andrew Holness announced in Parliament on Tuesday afternoon.

The new restrictions come just when some businesses were seeing promising shoots after being hit hard from months of crushing lockdowns.

“The curfew has proven to be the most effective measure, but it the most expensive measure because of the impact it has on the economy and on business,” Holness said, appearing to expect pushback from business leaders.

Donovan Wignal, president of the Medium, Small and Micro Enterprise Alliance, was disappointed that the loss of two hours of business would further dampen revenues. Businesses, he said, had got accustomed to operating with the 10 p.m. curfew.

“It’s not going to go down very well with the sector,” Wignal told The Gleaner Tuesday evening as he lamented the non-observance of outbreak containment protocols throughout the society.

Wignal said the downward adjustment of operating time will effective be more than two hours as businesses would have to make extra effort to close in some so their staff can be home by 8 p.m.

“We are just coming out of a rough period with 2020 and to see 2021 begin like this, it is not going to argur well for a lot of people in sector,” Wignal said.

The MSME Alliance president, however, expressed support for the measures, saying they were critical to flattening the curve.

Jennifer Bernard, staff supervisor at a popular restaurant in the Corporate Area, told The Gleaner that the new restrictions could not have come at a worse time.

“Valentine’s coming up and you know everybody looking to treat their significant other.

“In fact, we might have to close from 7 o’clock, so we won’t get the traffic we would need to put something in our pocket.”

Bernard said that the new year had extended the economic hangover from 2020, which saw unemployment almost doubling from 7.2 per cent to 10.7 per cent last October. At its most intense, the containment shock had caused an islandwide haemorrhage of 135,000 jobs.

“We depend on tips and so on … , so with this now, everything just mash up!” Bernard said Tuesday evening.

Dennis Chung, financial analyst and former chief executive officer of the Private Sector Organisation of Jamaica, does not believe that the tighter curfew hours will make much difference as people will readjust. Chung has been a constant critic of the 2020 lockdowns, arguing that they have done little to rein in the virus.

“I think that what will happen is that people will do their business in less available hours meaning more concentration of risks,” he told The Gleaner.

“I can understand the Government’s dilemma, but the solution is really enforcement of protocol,” he added.

“Entertainment is already devastated. It is going to be difficult to start back the economy in terms of productivity levels,” Chung warned.

Opposition Leader Mark Golding challenged Holness to produce data showing that the curfew was the most effective containment measure against the spread of the coronavirus.

Golding said, too, that the Government’s public-education programme had gone off the rails.

“One has to be careful with moving the curfew hours forward, because it means that persons have to do more in a shorter space of time,” said the opposition leader.

“And when it comes to things like supermarkets, gas stations, etc. where people have to come off the road, and be home by 8 p.m., there is more pressure to get things done. That could be counterproductive,” Golding added.

Holness, in response, argued that tighter curfews in St Thomas and Westmoreland, which had surging cases in late 2020, proved effective in restoring normality.

The prime minister told Parliament that he has spoken with Police Commissioner Antony Anderson about the need for stronger enforcement of the curfew and quarantine orders.

“Starting [Wednesday] when the curfew begins, the police will be visible and active on the roads,” said Holness, insisting that he was acting in the interest of the country.

He said new legislation for ticketing violators of curfew and quarantine orders was being drafted and could be tabled in Parliament in weeks.

The prime minister said it was not the intention of the Government to “kill commerce”.

“If we don’t act now, we could overwhelm our health system, which could lead to more problems,” Holness said.