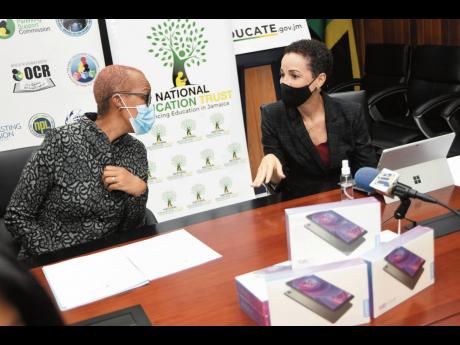 Rudolph Brown/Photographer
Senator Kamina Johnson Smith (right), minister of foreign affairs and foreign trade, talks with Fayval Williams, minister of education, youth and information,during a ceremony for the handover of tablets to the ministry by the Jamaican Consulate in New York on Tuesday. The event took place at the education ministry’s Heroes Circle headquarters.

WESTERN BUREAU: Disgraced former flight attendant Kalina Collier is not likely to be banned from ever visiting Jamaica, as Tourism Minister Edmund Bartlett urges the closing of that chapter in the country’s history. Collier brought Jamaica’s name...

Disgraced former flight attendant Kalina Collier is not likely to be banned from ever visiting Jamaica, as Tourism Minister Edmund Bartlett urges the closing of that chapter in the country’s history.

Collier brought Jamaica’s name into disrepute by using social media to convince hundreds of thousands of people worldwide that she had been held hostage while on vacation at the five-star Ocean Coral Spring Resort in Trelawny.

She made the false kidnapping allegations while trying to get out of quarantine after testing positive twice for the coronavirus. All visitors who test positive are required to quarantine for 14 days, either in a government facility or a hotel.

Collier’s video of being locked in a room at the hotel, charging that cameras were filming her movement, went viral, spurring several social-media influencers to start a campaign encouraging people to boycott Jamaica. At least one international organisation that investigates human trafficking joined the efforts.

On Tuesday, Collier was fired by JetBlue Airways, two days after returning to the United States with her Jamaican mother, Candice Walker. The airline apologised to the Jamaican Government for the frustration and concern the incident had caused the island, while reiterating its confidence in the health protocols Jamaica has put in place.

Bartlett welcomed the airline’s intervention, while noting that the country stood on the quality of the Jamaican experience. He said the discussions he had with JetBlue’s CEO resulted in a recommitment to the relationship the island has had with the carrier for more than a decade.

“Our long-standing relationship will erase any negative impression that this incident would have caused,” he said.

Urging Collier to apologise to Jamaica and Jamaicans, the tourism minister said he was satisfied that the truth about the former attendant has been widely received and accepted.

“By her admission, she has said she was not kidnapped,” he added.

In the meantime, Collier’s actions are expected to hasten the strengthening of Jamaica’s cybercrime legislation when a joint select committee reviewing that proposed law meets.

Speaking with The Gleaner on Tuesday, Minister of Foreign Affairs and Foreign Trade Kamina Johnson-Smith called for a revision of the Cybercrimes Act, which she said would prove more effective in penalising persons embroiled in a similar scandal.

“We are upset and deeply concerned at people’s irresponsible use of social media,” said the government senator.

She said that the Collier matter will be one of the issues on the agenda of the committee when it sits.