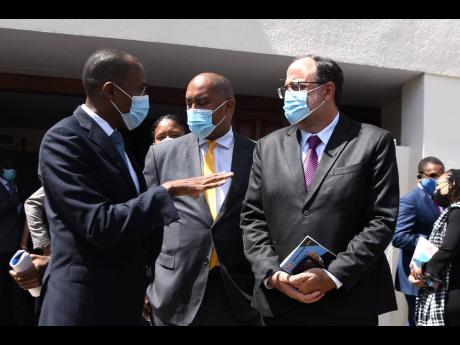 The Government has crafted a lean Budget for the upcoming fiscal year, focusing on an ambitious vaccination programme and jobs as linchpins to spark economic recovery.

Both the recurrent and capital budgets are flat year on year, but the Government plans to introduce a $60-billion programme it dubs ‘Serve Jamaica’, aimed at facilitating the vaccination of the majority of Jamaicans, financed mainly through a $33-billion dividend from the Bank of Jamaica, according to Finance Minister Dr Nigel Clarke in his presentation to Parliament on Thursday.

The second element of Serve Jamaica involves the continuation of a series of construction and agricultural projects aimed at employing Jamaicans.

“It will create thousands of jobs,” said Clarke in a quick response to a Gleaner query after his presentation.

“I will speak more on it at a later date.”

Clarke stated in Parliament that the Government would seek to procure vaccinations for two million Jamaicans in double- or single-dose portions, dependent on the type of drug.

“The GOJ will allocate the funds, under the Serve Jamaica Programme, to make the attainment of herd immunity in a single fiscal year fiscally feasible,” said Clarke.

Herd immunity would require 70-80 per cent of the population to be vaccinated.

The $60-billion programme will include $10.5 billion in special resources for the Ministry of Health, with two-thirds set for vaccines and the rest for personal protective equipment and related services. Approximately $31 billion will go towards infrastructure programmes to drive jobs and economic activity, with just over half focusing on the South Coast Highway.

Five billion dollars will go towards financing for businesses affected by the pandemic; $1.7 billion for rural farm roads and agro-productivity; $1.8 billion to expand wireless Internet in schools and communities; $8.1 billion in targeted social support beyond usual allocations; $700 million to complete construction at the Harbour Beach Park and other activities; and $800 million for other projects.

Clarke explained to The Gleaner that the capital budget should actually grow by about $10 billion once adjusting for the way Government will account for the social welfare Programme of Advancement Through Health and Education (PATH).

Previously, the Government placed the bulk of funds for PATH on the capital side of the Budget as it reflected a World Bank loan. With that loan at an end, the Government will put the funding of PATH on its recurrent side.

The COVID-19 pandemic has placed the economy and health resources of the island under severe stress. The fallout resulted in the loss of 130,000 jobs, with much of the haemorrhaging in the tourism sector. No public-sector jobs were lost, but the Government will seek a one-year delay “with respect to the commencement of implementation of the compensation restructure” as the GOJ focuses on facilitating Jamaica’s recovery.

“This Budget follows a year in which Jamaica experienced the worst economic contraction in its history, due to the measures necessary to slow the spread of the coronavirus,” Clarke said.

“Inclusive of the current January-March 2021 quarter, by the end of March, we will have experienced five consecutive quarters of economic decline,” he said.

Clarke said that the economy suffered several years of contractions under previous downturns.

“In the global financial crisis that began in 2008, for instance, the economy declined for three consecutive years and 11 out of 12 quarters. In the 1970s, we experienced five consecutive years of economic contraction from 1976 to 1980 inclusive,” he recalled in his presentation.

The timeline for recovery remains tentative, with future combined capital and recurrent budgets remaining flat until fiscal year 2023-24, at $879.6 billion, according to the Estimates of Expenditure. The Budget then jumps to $1.08 trillion in fiscal year 2024-25.