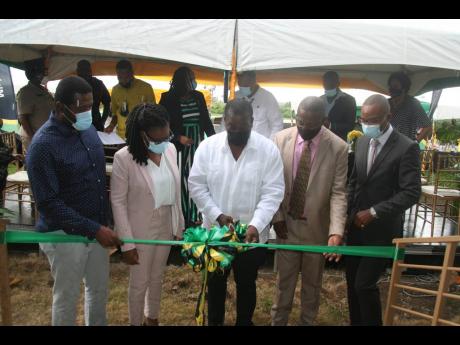 Photo by Bryan Miller
Transport Minister Robert Montague (centre) cuts the ribbon to mark the official opening of a new firehouse and rehabilitated runway at the Negril Aerodrome on Thursday. Looking on are Hanover Western Member of Parliament Tamika Davis (second left) and officials from the Airports Authority of Jamaica.

The Negril Aerodrome in Westmoreland has taken on a brand-new look, thanks to a $47-million rehabilitation of the facility, which is located in proximity to the world-famous seven-mile beach in the western resort town.

Approximately $30 million was spent on resurfacing the 660-metre runway, while another $17 million went into the construction of a new fire station with offices, male and female dormitories, washrooms, a kitchen, and a storeroom.

In his address, the minister noted that it is the belief of the Government that investments such as that in the Negril Aerodrome go a long way towards the creation and the building of safe and sustainable towns and communities.

Pointing out that there are 14 official aerodromes in Jamaica, Montague said that they could help people save time and money travelling across the island despite the various highways. He said that the time saved through air travel could prove to be very cost-effective, adding that getting the aerodromes up and running, and getting more persons to own airplanes and utilise them, would be very beneficial to all concerned.

“It is not an expensive thing as some people believe. It may sound strange, but the cost of things in the world has brought down the cost of aviation almost to nothing,” said Montague, adding that in an effort to encourage the use of aviation, his ministry has embarked on an improvement programme of the aerodromes across the country.

Montague also noted that with the improvements taking place, there were also efforts to boost safety at the aerodromes, mentioning that a police station was being constructed at Ian Fleming.

“It is our (the Government’s) job to make sure that our airports are safe; hence, the collaboration with the Jamaica Fire Brigade and the police,” said Montague

He said that the Government was looking at purchasing a satellite-based positioning system, which will not only assist in monitoring air traffic but also boost the earning power of the country through aviation.