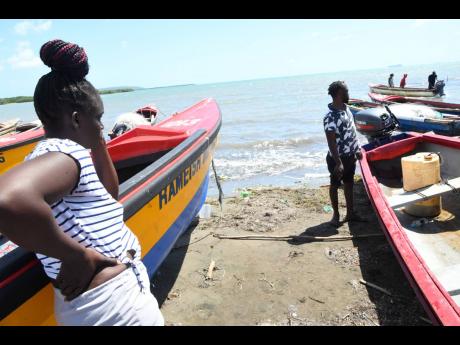 Rudolph Brown/Photographer
A forlorn Shenel Smith looks out to sea as she awaits news of the continued search for her missing father, Michael Smith, who did not return from his latest trip. Glen Bernard, who was also on the trip, is believed to have been eaten by sharks. 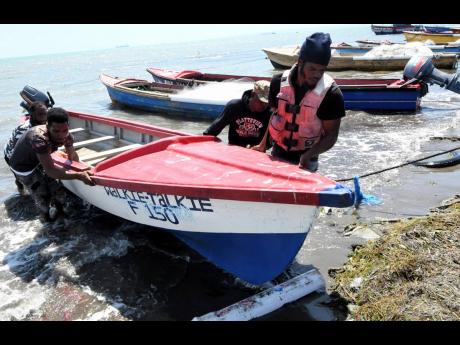 Rudolph Brown/Photographer
Members of the search party pulling up at the Old Harbour Bay beach yesterday after trying to locate Michael Smith. 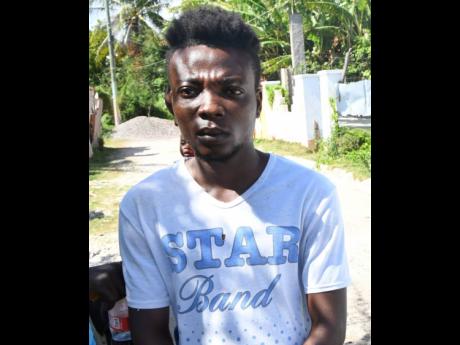 Rudolph Brown/Photographer
Kemar Pusey, a member of Glen Bernard’s household, said that the remains and clothing found in the shark’s stomach were of the missing fisherman.
1
2
3

Despite the apparent tragedy in which a fishing trip ended on Sunday night as residents ripped open the stomach of a shark captured in Old Harbour Bay in St Catherine, 27-year old Shenel Smith is hanging on to a thread of hope that she will see her...

Despite the apparent tragedy in which a fishing trip ended on Sunday night as residents ripped open the stomach of a shark captured in Old Harbour Bay in St Catherine, 27-year old Shenel Smith is hanging on to a thread of hope that she will see her father – one of two men who ventured out to sea – again.

The disappearance of Michael ‘Mikey’ Smith and Glen ‘Short Man’ Bernard has left members of the small fishing village of Peters Lane in despair.

Alarm bells were triggered on Monday morning when the duo did not return from their trip at the customary time.

“Them left Sunday night and usually would come back Monday between 8 and 9 a.m., but when mi see the time pass, mi call him phone two time, and it ring and go to voice mail. Mi call it a third time, and it just go to voice mail, so mi start to wonder what happen to him,” Shenel told The Gleaner.

Smith said by about midday on Monday, she arranged for a search party of local fishermen to locate the men, but they turned up nothing.

It was not until late Monday afternoon that the search team found Smith’s fishing net, gas tank, and later, the boat on the sea floor. But there was still no sign of the two fishermen.

On Tuesday afternoon, remains and clothing identified to be that of Bernard were taken from the stomach of a shark caught in the vicinity of where the fishermen went missing.

“We make out his hand, and we see the same clothes he had on before him left for sea Sunday night,” said Kemar Pusey, a member of Bernard’s household.

“We beg Short Man, as we called him, not to go to sea because he had done an X-ray on his hand that was hurting and he was on antibiotics, but him still go. He was a good good man who come here from Westmoreland, and we take him in and treat him like family,” said Pusey.

Still, with lingering questions and no sign of her 55-year-old father, who captained the 28-foot fishing boat, Shenel is finding it difficult to cope.

“Mi nah go feel comfortable until mi si even a piece of mi father remains. To me, him nuh dead. The last time mi see him was Sunday 2 o’clock. From Monday, mi can’t sleep. As mi shut mi eye, a mi father mi see in front of me,” said the distraught daughter.

Shenel said that her kind, compassionate dad is loved by the entire fishing village.

That love and concern for Smith was on full display yesterday as scores of residents rushed to meet the returning search party as the two boats pulled up in the shallow waters on the shoreline.

The disappointment on their faces was quite pronounced when Timothy Dixon, who led the effort, revealed that they had not found the missing man.

“Despite seh we don’t come up with nothing, we will continue searching. We can’t just give up because we don’t know what really happen. Yes, we know now that Short Man was eaten by shark, but we don’t know if Mikey was also eaten,” he told The Gleaner.

Dixon, an experienced fisherman, said the two could have got into difficulties because of the bad weather and were just not able to keep the boat from capsizing.

Another fisherman, Andrew Williams, said that the inclement weather prevented him from venturing out on Sunday night.

“Mi can’t feel good. From mi know him (Smith), a di first him get into trouble and can’t come out. We will miss him – a one-of-a-kind fisherman that take care of everybody,” he said.