Update | In aftermath of attack, Guardsman to give all couriers bulletproof vests, making them mandatory 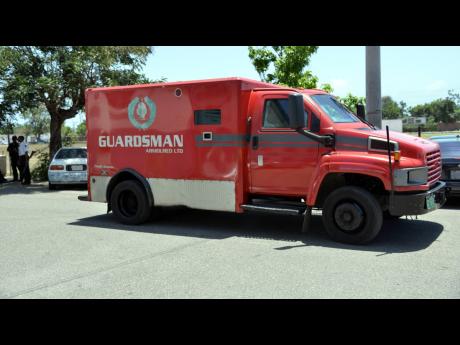 File
After a deadly attack in St Elizabeth, Guardsman has committed to fitting its 300 guards working on armoured trucks with bulletproof vests.

A day after one of its security officers was killed in a foiled robbery in St Elizabeth, Guardsman Group has committed to mandating the wearing of bulletproof vests among its 300-strong armoured fleet guards.
The security company is also replenishing its stock of bulletproof vests for that cohort.

Not all guards on armoured vehicles are fitted with vests.
Anthony Embden, 50, succumbed to bullet wounds after a gun attack outside a Western Union remittance outlet and cambio in the southern Jamaica town of Santa Cruz on Wednesday. He was not wearing a vest at the time of the incident.

“If he (Embden) had on his bulletproof vest, it probably would not have ended up the way it did,” said Kenneth Benjamin, the executive chairman of the Guardsman Group of Companies, who noted that guards sometimes removed their vests because they are heavy and uncomfortable.

However, with a rash of robberies at financial institutions in western Jamaica over the past seven months, Benjamin believes the company is left with no other choice but to make the wearing of protective vests mandatory as attackers show a growing willingness to engage couriers in gunfights.

“If they are not doing it (wearing the protective vest), they will be charged with an offence and then we will take the corrective action,” Benjamin told The Gleaner on Thursday. “This is all about ensuring that they stay safe and sound on the job.”

Commander George Overton, Guardsman’s director of communication, said the company was in the process of replenishing its stock of protective vests and had just landed a shipment on Monday.

The security company’s supplier retails each vest for approximately US$600.

Reflecting on Wednesday’s attack, in which two other guards sustained injuries, Benjamin believes the remittance outlet and cambio were the real targets, and not the armoured truck. He praised the bravery of the three guards.

“It is only occasionally that we have robbers attacking an armoured truck … . In fact, they didn’t even attack the truck,” said Benjamin, in explaining what unfolded. “We are of the opinion that they were actually going for the bank.

“When our team went there, the door was locked from the inside because they hadn’t quite opened yet ... . By the time somebody came to open the door, the shoot-out happened.”

Guardsman will be reviewing its operating protocols.

Benjamin was adamant that Guardsman intended to help police investigators track down, catch and bring Embden's killers to justice. He expressed condolences to Embden’s wife and two sons.

“We are not going to allow them to get away with what they did,” said Benjamin.

The two injured guards, who were taken to hospital, were treated and released.

Editor's Note: Guardsman is clarifying that while Wednesday's attack may have prompted emphasis on the enforced wearing of bulletproof vests, its replenishment of stock was preplanned, as evidenced by the latest shipment on Monday.