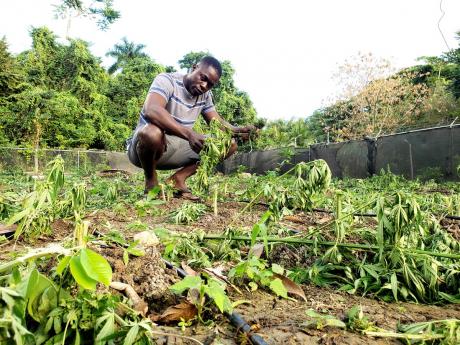 Contributed
Royan Harris, at a destroyed marijuana field in Dumfries, St Thomas. He alleges that the narcotics police wiped out the crop despite his pleas that the faith group had a sacramental right to cultivate weed.

This letter is further to the article ‘Bald-head Rasta chants fire after cops destroy ganja farm’ published in The Gleaner. It is extremely difficult to believe that this event took place. We were warned, and it has been reported to official ganja bodies from farmers, Rastafari and non-Rastafari, that this is taking place across Jamaica in 2021 after six years of the decriminalisation of ganja.

This is as bad as the British who sent the police to destroy Pinnacle and Leonard Howell, founder of the Rastafari movement, in the 1930s and the bulldozing of Rastas in west Kingston , and the Coral Gardens debacle in the old days of ignorance and colonial political turmoil.

Today we are out of physical colonial rule and are supposed to be independent and have human rights, but it took place anyway in February which is Black History Month, Reggae Month, Rastafari Month, and when black lives matter across the globe now.

It is against the background of economic and social stress, unbearable levels of murders, and at a time when the country is looking forward to developing a successful ganja industry to help diffuse these problems.

The actions of destroying ganja fields could never be an accidental event, and it is amazing that the police have the time to do so. Farmers, Rastafari and the entire industry thereby are obviously being targeted for some reason that must be investigated and dealt with immediately. If not, this could possibility become another horror story which no sensible person wants or needs.

Mr Prime Minister and team, I urge you, along with the ganja stakeholders, to solve this virtually unbelievable situation.